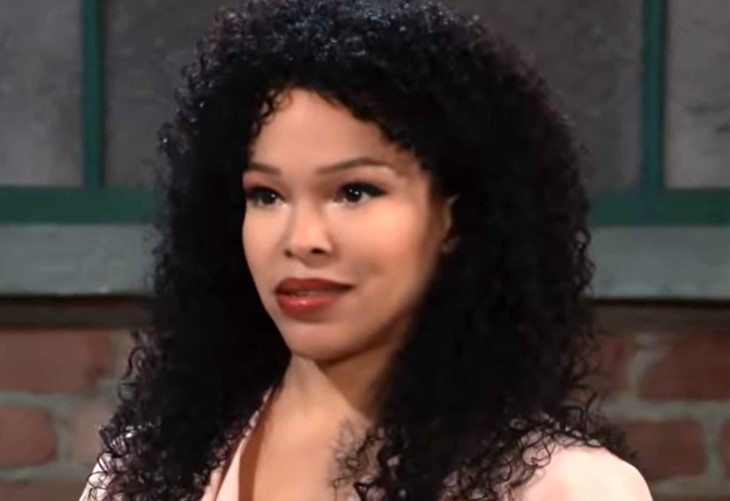 General Hospital spoilers for Friday, May 20 tease that for some there are revelations, others, confirmations on the next GH!

General Hospital Spoilers – His Business Is Being Threatened?

Portia Robinson (Brook Kerr) is greatly concerned by what Port Charles Police Commissioner Jordan Ashford (Tanisha Harper) is telling her. Curtis Ashford (Donnell Turner) had been afraid that by letting Selina Wu (Lydia Look) bring her high-stakes gambling into the Savoy this could happen! Portia asks for verification of what Jordan obviously has just told her as she asks, “Curtis’ business is being threatened?”

GH Spoilers – You Did Right

Curtis, in the meanwhile, has gone to Brooklyn to join TJ Ashford (Tajh Bellow) and Molly Lansing-Davis (Haley Pullos) in the search for Marshall Ashford (Robert Gossett) unaware they’ve found him. It looks like Curtis perhaps has reached his destination as he is talking to someone about his father, telling them they did right by Marshall. He may be inside the jazz club that TJ and Marshall were heading over to and talking to Molly, who had left the restaurant first and went inside. Little did Molly know what was going on in the alley that leads to the stage door as she waited!

General Hospital Spoilers – She’s Onto Something

Back in Port Charles at Kelly’s, Dr. Hamilton Finn, (Michael Easton) Gregory Chase, (Gregory Harrison) and Violet Finn (Jophielle Love) are still at the table where Violet’s finishing her sundae. Violet had noted as Finn had told his father no one was ever there when the mysterious stalking incidents had happened to Elizabeth Baldwin (Rebecca Herbst) that Liz was there! Finn has a light bulb epiphany moment as he tells his father he thinks Violet might be onto something.

Could Elizabeth be doing these things herself and unaware of it, and not remember afterwards? Could she have developed dissociative identity disorder, sometimes called multiple personality disorder?

GH Spoilers – What Are You Doing?

Finn may be right in his hypothesis as back at the Baldwin house, Elizabeth has snuck out of Dr. Kevin and Laura Collins’ (Jon Lindstrom, Genie Francis) home! Viewers saw a dark Elizabeth tearing up the family drawing that Violet had made earlier of herself, Finn, Cameron Webber, (William Lipton) and Jake and Aiden Spencer (Hudson West, Enzo DeAngelis). It looks like Cameron was home and discovered his mother as she appears to be in some kind of dark trance, likely tearing up the picture possibly even more. Cameron is incredulous as he asks his mother what is she doing?

General Hospital Spoilers – What If You’re Both Wrong?

Willow Tait (Katelyn MacMullen) talks to Michael Corinthos (Chad Duell) ahead of the court hearing where Nina Reeves (Cynthia Watros) has sued for visitation of Wiley Corinthos (Viron Weaver). Willow asks Michael what if they are both wrong, and Nina wins? She is obviously referring to him and his mother, Carly Corinthos (Laura Wright) and she is concerned they’re a little too self-confident.

Nina had promised to fight fire with fire and she’s not afraid to get ugly about it. Michael has already gotten ugly by giving Grant Smoltz (David Lautman) a five part exposé on Nina’s past!

GH Spoilers – There Won’t Be A Hearing Tomorrow

At The Savoy, Carly and Bobbie Spencer (Jacklyn Zeman) had encountered Nina and Sonny Corinthos (Maurice Benard) having a drink together. Tensions mount between the two pairs as Bobbie warns Nina that this is what she has to say – there won’t be a hearing tomorrow! How Bobbie can guarantee she can stop the wheels of justice from turning is another issue, but it’s plain that Bobbie wants Nina to have no chance! Bobbie wants there to be no question that Nina will never see her grandson again, of course being in unity with her daughter and grandson!

General Hospital Spoilers – I Know When You’re Hiding Something

While Nina tangles with Bobbie, Sonny tangles with Carly as they sit down at a table and talk about the issues with the visitation hearing. Carly’s holding something back and Sonny can tell, because he knows her better than anyone else, and tells her he knows when she’s hiding something! Carly is likely going to play it close to the vest and deny his allegations, or else become the person she hates, a lying liar who lies!

Carly shouldn’t be surprised if Sonny doesn’t believe her and goes about finding out what she’s hiding his own way! And, she and Michael had better buckle up for a bumpy ride, because he’s not going to let Michael take him down and tear down everything he’s built!

In the back alley to the stage door at the jazz club in Brooklyn, TJ is bending over someone on the ground and tells someone to call 911! Perhaps Curtis has arrived by this time or it could be either Molly or his grandfather Marshall he’s talking to, but someone is hurt! Odds are pretty good it’s Marshall, because TJ refused to back down to a couple of thugs likely looking for some quick money to score some drugs. He was not giving up Marshall’s clarinet, and one pulled out a knife; if he went for TJ it’s a sure bet Marshall took the hit!