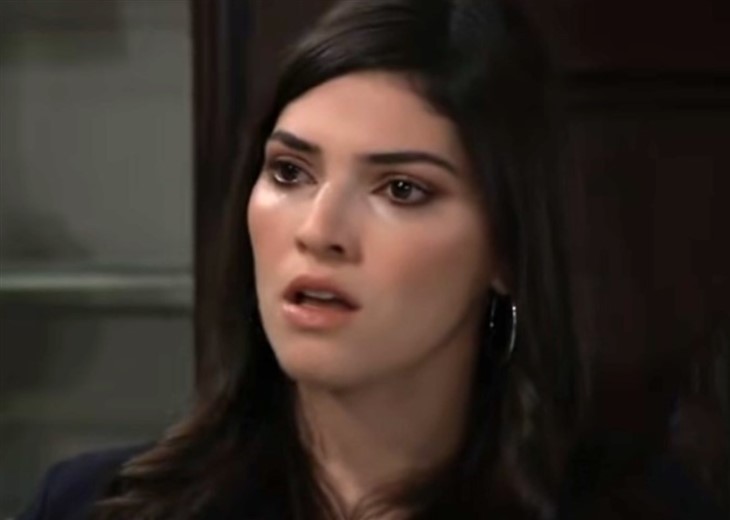 General Hospital spoilers and updates for Friday, May 13 tease that many questions need answers for many people in Port Charles in the next GH!

General Hospital Spoilers – They’re Planning For The Future With No Place for Me!

Ned is livid as he tells Brook Lynn that they’re planning for the future of the new merged company with no place for him! Previously, Drew and Michael had assured him that he would be involved in all steps of the process, but apparently they’ve left him behind in their planning!

GH Spoilers – Calm Down, We’ll Find Her Together

Willow Tait (Katelyn MacMullen) has resolved to find her birth parents, and in particular her birth mother after the death of Harmony Miller (Inga Cadranel). With Harmony’s death, a secret was revealed that blindsided and worried Willow – Harmony wasn’t her birth mother and Willow had never been told. Dante Falconeri (Dominic Zamprogna) had brought Willow and Michael the news shortly after Harmony’s death and Willow doesn’t know if she was kidnapped or what happened!

Now, Sam McCall (Kelly Monaco) reassures Willow that they’ll find her birth mother together; the first search likely didn’t turn up anything, which is not surprising. Harmony had given Alexis Davis (temporarily Stephanie Erb) a phony story about a Prophet Josiah on a commune in Oklahoma giving her the child of a woman who’d disappeared!

At Kelly’s, Valentin Cassadine and Martin Grey (Michael E. Knight) plot concerning the merger of Aurora Media and ELQ; this merger will return Drew’s shares back to him. This is the strategy that Drew and Michael came up with to get the power and the majority shares from Valentin and back to the Quartermaines. Valentin has his phone up to his ear as Martin tells him what will happen if the family remains a united front, and unfortunately, Valentin won’t have a chance! Valentin will have to find some way to keep the ball in his court in spite of the Quartermaines playing dirty pool!

GH Spoilers – Something To Report?

At General Hospital, Port Charles Police Commissioner Jordan Ashford (Tanisha Harper) walks up to her son, Dr. TJ Ashford (Tajh Bellow) and asks him if he has something to report. Viewers will recall TJ was the doctor on duty in the emergency room when Harmony Miller was brought in – the first patient he lost. The investigation is ongoing around the Miller case, but also, Marshall Ashford (Robert Gossett) has gone missing – TJ may have asked his mother if she could provide any official help. The subject of Marshall leaving town and leaving TJ his clarinet is bound to come up!

General Hospital Spoilers – Backing Down Is Not An Option

Meanwhile, at Nina Reeves’ (Cynthia Watros) office, Curtis Ashford (Donnell Turner) is checking in on her and offering some encouragement. He tells her backing down is not an option, and they are obviously talking about Nina’s upcoming court case to assure she has a place in her grandson’s life. Nina is prepared to fight fire with fire and play dirty in court as Attorney Scott Baldwin (Kin Shriner) said they may have to!

Nina has no intention of giving in to the dirty tricks that Michael played by giving Grant Smoltz (David Lautman) a five part exclusive on Nina’s fraught past! Curtis knows how desperately Nina had wanted to find her long lost child and how she only found out it was Nelle Benson (Chloe Lanier) after it was too late!

GH Spoilers – I’ll Prove It To You

At the Quartermaine gatehouse where Michael and Willow live with Wiley Corinthos (Viron Weaver) Dante is paying a visit. The subject turns to Sonny Corinthos (Maurice Benard) who Michael has bitterly cut out of his life again! Willow had tried to get him to soften up where Sonny is concerned, but he doesn’t understand how Sonny can say he cares about his family! Dante tells Michael that Sonny does care about has family and he’ll prove it to him!

General Hospital Spoilers – Yeah, I’m Going To Put A Stop To That

Meanwhile, elsewhere Sonny is talking to someone and clarifying he’s going to “put a stop to that”. Sonny, along with Drew, Olivia, Ned, Brook Lynn and other parents are at the school festival where among other things, Leo will give his performance. Dante and Sam should be there for their children and Sonny is there for his, meaning Avery Jerome-Corinthos (Ava and Grace Scarola). Donna Corinthos (Ava and Ayla Dormiani) and Wiley are still a little bit too young for school! Sonny may be talking about family dysfunction in his family he’s meaning to put a stop to.

Days Of Our Lives Spoilers: Ciara In Danger As Satan’s Plan Unfolds