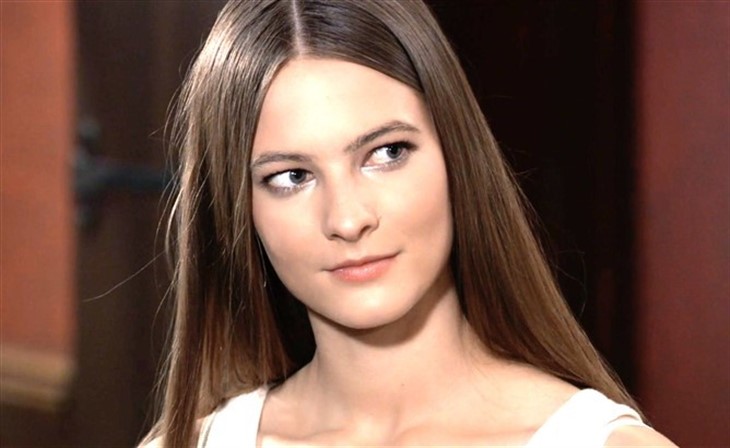 General Hospital (GH) spoilers reveal that Esme Prince (Avery Kristen Pohl) is presumed dead by Nikolas Cassadine (Marcus Coloma) and Ava Jerome (Maura West) although that is not what they are telling everyone else. Their official story is that the young hellion has “left town.” Which is code for Esme is dead after sleeping with Nikolas and fighting with Ava. No wonder they feel the need to spin the truth!

Presuming that Esme is not dead, because no soap character is ever truly deceased, this begs the question: where is Esme?

There is one place that she would be reasonably safe, and that is out of the country. Which leads to the one person who may not hate her at this point, her London nanny. Will Esme run away to hide out with her former nanny, Maggie Fitzgerald?

Esme could turn to her father, Ryan Chamberlain (Jon Lindstrom), if he weren’t a locked up psycho at Spring Ridge.

For now it appears to Nikolas and Ava that their tormentor is gone—Nikolas found only a forlorn shoe, not even a pair– following Esme’s parapet tumble. But these two should know better, a fall off the parapet does not mean an automatic death sentence.

Esme has few people she can turn to, with Maggie being pretty much the only one. Tales of Esme’s heinous behavior, although sickening, wouldn’t make international news. Being Esme’s nanny, she probably thinks fondly of her charge and thinks she can do no wrong–other than contact Ryan, but that’s water under the bridge now.
General Hospital spoilers: Will Maggie Rescue Esme?

Maggie has been shown to have ongoing concern for Esme so it makes sense that Maggie would appear at some point in time, why else make her such a prominent part of Esme’s story? There’s every reason to believe that Esme was able to swim to safety and call the only person she could beg for help.

If asked, why wouldn’t Maggie arrange for Esme to travel to London? She no doubt would love to see the child she once cared for again, and in London Esme would have space to figure out what she’s going to do next.

Adding fuel to this speculation is the fact that Sam McCall (Kelly Monaco) knows about Maggie and has been looking into her. If Sam finds Maggie, she would eventually find Esme, too. What do you think GH fans, is Esme about to pop up in London?

B&B Spoilers: Will Thomas Get Custody Of Douglas? Hope Fights Back