GH Spoilers: Esme Fakes A Pregnancy, Will Spencer Fall For It? 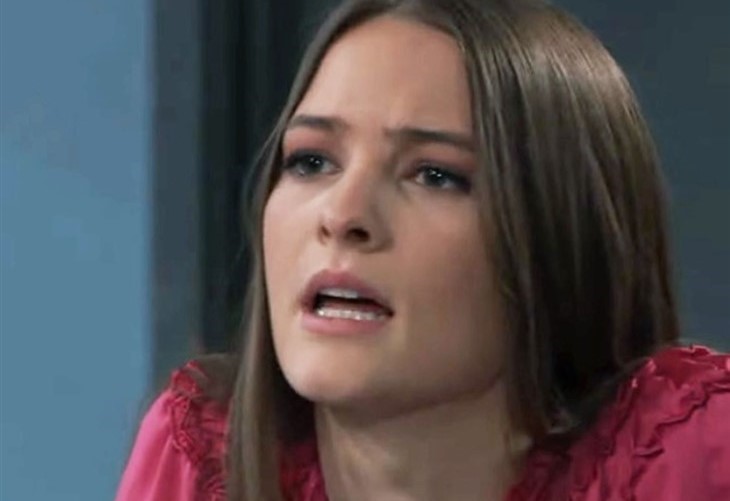 General Hospital (GH) spoilers tease that Spencer Cassadine (Nicholas Chavez) is starting to see Esme Prince’s (Avery Kristen Pohl) true colors. But Esme is crafty and may have a plan to keep Spencer in her web, and away from Trina Robinson (Sydney Mikayla). Spencer has asked Esme to tell him the truth about the video of Cameron Webber (William Lipton) and Josslyn Jacks (Eden McCoy) having sex. Esme is trying to convince everyone that Trina was the guilty party, but as viewers know Spencer is correct to suspect Esme!

Esme couldn’t convince Spencer she was innocent so she planned to move out of Laura Collins’ (Genie Francis) home. But as Spencer reached to stop her, a pregnancy test fell on the floor right in Spencer’s view. Spencer will undoubtedly want to know if Esme is pregnant with his child, which is most likely exactly what Esme planned. She knows she is losing Spencer, and this would be the one way to keep him invested in her without appearing desperate. But it’s likely all an act. Esme is the master of deception!

From torching Ava Jerome’s (Maura West) to uploading the sex video, Esme has already proved she is capable of the most devious and cruel tricks. Making Spencer think she is pregnant with her child would be nothing for Esme and it would keep Spencer on her leash. Even if Spencer knows Esme is devious, he won’t abandon his child. Spencer grew up without a mother, so Esme’s act of duplicity will do exactly what she wants it to.

But if Esme is pregnant, it may put a damper on her assignment to seduce Spencer’s father, Nikolas Cassadine (Marcus Coloma). So it remains to be seen how this will all play out. Will she admit to Spencer that she is faking, or could she plan to have an abortion. Perhaps that is why she didn’t tell Spencer about the pregnancy test.

Is Esme really pregnant? Or is it just a ploy to keep Spencer on her leash? How will this impact Esme’s assignment to seduce Nikolas? Anything can happen in Port Charles so stay tuned to General Hospital airing weekdays on ABC. And don’t forget to check back right here regularly for all your General Hospital news, information and spoilers!

Days Of Our Lives Spoilers: Allie And Johnny Have A Major Showdown

Days Of Our Lives (DOOL) Spoilers: Is Abby’s Split Personality Back?