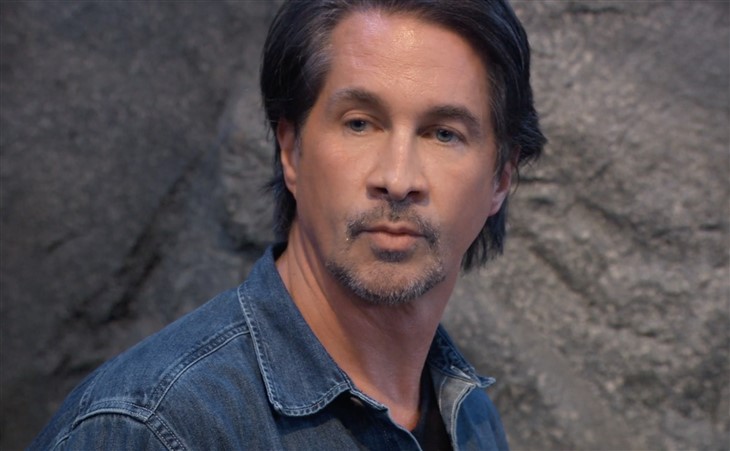 General Hospital (GH) spoilers indicate that the writers seem to be setting it up to look like Dex Heller (Evan Hofer) is “The Hook”. However, Liz Baldwin’s (Rebecca Herbst) memories are making Hamilton Finn (Michael Easton) look very suspicious. Liz has just discovered that Finn worked with her parents in Doctors Without Borders years ago. Now it seems Finn’s wife was involved with Liz’s father. Did Finn kill her?

General Hospital spoilers reveal that Liz recently remembered a woman falling down the stairs after telling her to stay away from her father. Now Liz has realized that this woman was Finn’s wife. Up until now, Finn has said his wife died from Blackwood Syndrome. However, this looks very suspicious.

Now it is clear that Finn pushing Peter August (ex-Wes Ramsey) down the stairs is exactly what created Liz’s problem. Did Liz see Finn push his wife down the stairs as well? Has Liz subconsciously hidden this for all of these years only to be triggered by Peter? Will Liz tell anyone what she knows about Finn’s past actions?

Finn has been the one to give information to Alexis Davis (Nancy Lee Grahn) to try to bait the killer. Finn knows that this could possibly mess with the police investigation. Is Finn trying to purposely sabotage the case to protect himself? Could Finn also be setting up Dex to take the fall? Liz was concerned enough to leave Finn at the hospital. However, this leaves Finn without an alibi, could he have gone to Brando Corbin’s (Johnny Wactor) garage?

Finn also revealed where the toxin came from on the hook. Finn did enough research that he knows the toxin was from a reptile. However, it would take a bit more studying to find out what. Finn has a reptile named Rosie, could it have come from her? Is Finn not the nice go that everyone believes he is?

General Hospital Spoilers – Hamilton Finn Would Be A Shocking Killer

Finn has been such a good guy all of this time. Turning Finn bad and having him kill his wife sounds a bit extreme. However, it would also be a great mystery story. How far will the prosecution of Dex go before he is found innocent? Will the killer continue to act out for recognition?

If Finn is the killer, what does he hope to accomplish? Will Finn play cat and mouse with Alexis Davis (Nancy Lee Grahn)? Finn and Alexis dated a while back, will she figure out what he is up to and stop him? Will the truth about Finn’s wife’s death ever come out?

Days Of Our Lives Spoilers Next 2 Weeks: Jennifer In Custody, Paulina Scandal, Nancy & Craig Make Up?