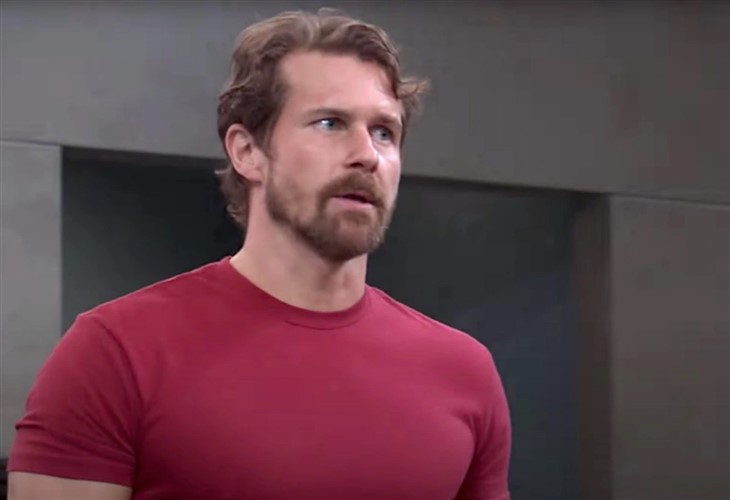 General Hospital (GH) spoilers tease that Cody Bell (Josh Kelly) is full of shocks and surprises. Yesterday he dropped a huge bomb, spilling that he is Dominique Stanton’s (Shell Danielson) son, and that the Bell family raised him when she was not able to.

He practically yelled the truth at Scott Baldwin (Kin Shriner) who was led to believe for a hot second that he could be Cody’s dad. Eventually the truth came out, with an audience no less, and it was discovered that Scott is not his dad. Whew big relief on Scott’s part who admitted he could have spawn all over the country!

This whole setup now begs the question, who is Cody’s father? The rumor mill is on fyah with one potential answer: Mac Scorpio (John J. York).

The truth about Cody’s mother was revealed during a heated session at the Metro Court pool between Cody, Scott, Leisl Obrecht (Kathleen Gati) and Britt Westbourne (Kelly Thiebaud).

No one knew what to think when Cody admitted that Dominique was his biological mother. According to him, by the time Cody found out the truth, Dominique was dead. AND here’s the kicker, her money was gone.
Cody was adamant that he was born before Dominique met Scott, thus Scott isn’t Cody’s biological father. But why all the buildup if there isn’t going to be a real shocker coming up about his paternity?

Longtime fans will recall that Dominique was involved with a man named Leopold Taub (Charles Lucia). He was the abusive husband she was trapped into a marriage with. Perhaps she left Cody because he was a painful reminder of her past, or to protect her son? That is entirely possible and plausible. It would also explain why Dominique did not keep Cody.

But, Mac was also involved with Dominique at one time, making him a baby daddy candidate. Recently the show has explored that Mac has no biological kids, and hinted that Esme Prince (Avery Kristin Pohl) could be Felicia’s daughter. In other words, the couple could soon be confronted with heretofore unknown children.

Are both Felicia and Mac about to find long-lost kids? Tell us GH fans, what do you think of law-abiding Mac being the dad of law-breaking Cody?