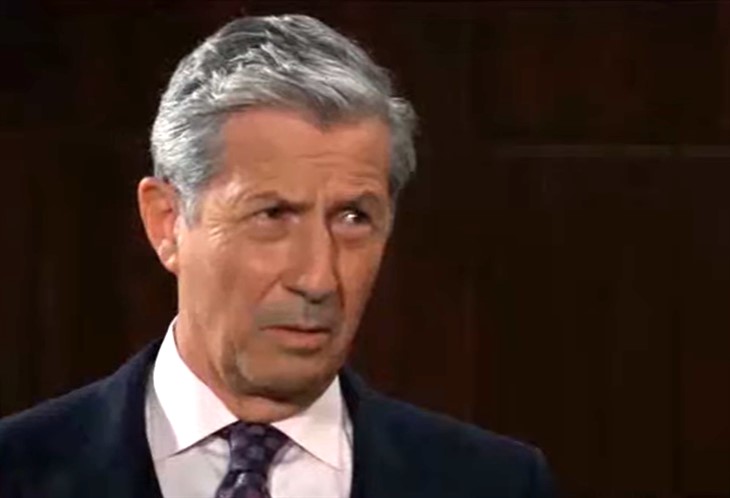 General Hospital (GH) spoilers indicate that despite the fact that it’s the middle of winter in Port Charles, it’s going to get really hot in the next few days. And while it might be nice to get to wear shorts for a few days. The temperature will continue to rise tp dangerous levels. Tempers will begin to flare and health concerns will become a real possibility. Victor Cassadine (Charles Shaughnessy) was once a part of a Cassadine family plot to freeze the entire town decades ago, and it seems as though that’s why he’s returned to Port Charles!

The reason Victor has been so single minded in his desire to control Drew Cain (Cameron Mathison) wasn’t Drew ability to kill quickly and efficiently and many had believed. Instead, at one point Drew knew the location of the Cassadine’s weather control machine. Drew lost some of his memory years ago, but Victor was banking on a mind controlled Drew to lead him right to the very dangerous machine. Victor will find what he is looking for very soon.

GH Spoilers – The Extreme Heat Will Lead To Chaos At Spring Ridge Prison!

Spring Ridge is a low security prison. Under any other circumstances, Ryan Chamberlain (Jon Lindstrom) would be incarcerated at a maximum security facility, but Ryan was stabbed inside Pentonville over a year ago. He survived but seems to have developed “locked-in syndrome”, which means he can’t move a single muscle in his body other than his eyelids. Even though he can’t move he will still experience pain. Ryan could have been faking the condition from the beginning or slowly been recovering over the last few months. If he has recovered, look for Ryan to take advantage of the situation when the guards begin to get careless. But Ryan’s escape plans may not have included two people who could potentially stand between Ryan and his freedom.

Harmony (Inga Cadranel) has been working as an Aide at Spring Ridge ever since her own prison term ended. She was one of the leaders of the Dawn of Day cult and committed many crimes in their name and included drugging young women so they would be compliant even as cult leader Shiloh (Coby Ryan McLaughlin) forced himself on each one as part of their initiation. But eventually Harmony turned against Shiloh and even testified against him. She served her sentence at Pentonville and ever since she was released she has made every effort to turn into the best version of herself. Given her transformation over the last several months, Harmony may sacrifice herself to keep Ryan from escaping.

General Hospital Spoilers – Spencer Cassadine (Nicholas Chavez) is also currently incarcerated at Spring Ridge because of his crimes against Ava Jerome (Maura West). Spencer was very grateful that his girlfriend, Esme Prince (Avery Kristen Pohl) is working as an intern there as well. But after Esme’s frequent visits were exposed, Spencer was disappointed and even as the temperature continues to rise so will Spencer’s suspicions. He may even wonder if Esme has been helping Ryan either recover from his inability to move so when he makes his move to escape, no one will be ready. So Spencer will take it upon himself to make sure Ryan doesn’t use the heat wave as a cover to escape!

GHSpoilers – What Do You Think?

Is Ryan to use the heat wave to help cover his escape attempt? Will he request Esme’s assistance or has he regained movement? Will Harmony or Spencer have to give up their life to keep Ryan from ever escaping again? Anything can happen in Port Charles so stay tuned to General Hospital airing weekdays on ABC. And don’t forget to check back right here regularly for all your General Hospital news, information and spoilers!