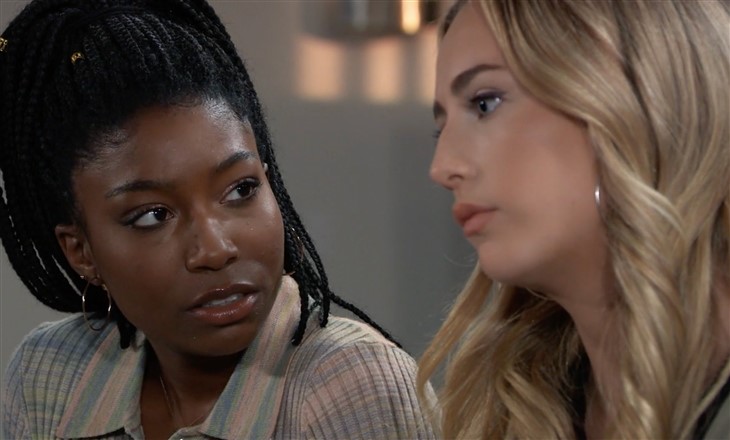 General Hospital spoilers and updates for Tuesday, June 14 tease the Port Charles power players make plots, plans and promises on the next episode of GH!

General Hospital Spoilers – We Have A Plan

Port Charles University had issued a Title Nine to Trina, which means she may be facing expulsion from the school because of the negative publicity and the criminal charges she faces. Trina looks relieved that Josslyn has found someone who can help them find the truth and prove it!

At the campsite near Pautauk, New York, Cameron Webber (William Lipton) is obviously regretting going on the camping trip after his grandmother, Laura Collins (Genie Francis) talked him into it. He’s with Hamilton Finn, (Michael Easton) his younger brothers, Gregory Chase (Gregory Harrison) and Violet Finn (Jophielle Love) and he says, apparently to himself, “Coming here was a huge mistake!” Finn will try to bond with Cameron but he’ll be very resistant, although he’ll take note of Finn’s efforts. Finn and Gregory had taken Cameron and his brothers camping in an effort to get their minds off of their mother, Elizabeth Baldwin’s (Rebecca Herbst) serious condition. Elizabeth is in Shadybook Santarium for an indefinite length of time.

At the PC Pioneer camp near Pautauk, New York Maxie Jones (Kirsten Storms) gives Austin Gatlin-Holt (Roger Howarth) some encouragement. It seems he must be a little bit intimidated even though he’s near his old stomping grounds and in his element in the woods! They both have PC Pioneer camp counselor sweatshirts on and perhaps the thought of counseling a child is what’s bugging him although it shouldn’t.

Austin was great with Leo Quartermaine (Easton Rocket Sweda) back at home in Port Charles, he should do great here in the woods! He will follow Maxie and engage after a little more encouragement!

GH Spoilers – My Chair Might Have A Better Idea

Finn is about as enthusiastic as Austin when Gregory makes a suggestion to him, likely on how to make some headway with Cameron. Finn dryly tells his father that his chair might have a better idea, since he seems to be getting nowhere very rapidly! Perhaps by the end of the camping trip things will be looking up – one can see a happy Violet in the background, and the rest are having fun! This situation with Elizabeth and with Cameron might take a while to resolve; after all there are complex issues involved. Finn, however is getting discouraged over if he and Liz will ever be able to move forward with their relationship!

General Hospital Spoilers- Do Nothing Else, Understood?

It turns out that Damian Spinelli is who Josslyn called for help. He arrives at Kelly’s and talks to the girls about his ideas but wants them to steer clear and let him handle everything. He tells Trina in particular, to do nothing else and makes sure she understands!

Spinelli has been in the private investigation business for a long time and he knows what he’s doing! Extra helpers sometimes only serve to muddy up the waters and he can handle this expertly!

GH Spoilers – I Don’t Want To Owe You

Old friends Cody Bell (Josh Kelly) and Dante Falconeri (Dominic Zamprogna) catch up at a table at The Savoy, and talk about their past. Cody tells Dante he doesn’t want to owe him like that and never has and never will! It sounds like the two may have some secrets together and later Dante and Sam McCall (Kelly Monaco) will have some questions for him. Cowboy Cody just gets more and more interesting by the day!

Nina Reeves (Cynthia Watros) and her cousin Britt Westbourne (KellyThiebaud) catch up at the Port Charles Grille and toast to making them suffer!  They are obviously talking about the people in their lives who have done them wrong, and Britt laughs at Nina’s toast and totally agrees! Between the two women probably at least half of the town of Port Charles hates one or both of them, so the toast does seem appropriate! Nina just lost a court case and Britt may be starting one soon!

At The Metro Court, Sonny and Carly Corinthos (Maurice Benard, Laura Wright) continue their previous conversation about Michael Corinthos (temporarily played by Robert Adamson). Michael intends to crush Sonny and told him that he basically severed his relationship with his family and children, and Carly had agreed with Michael! Carly is frustrated now and tells Sonny she doesn’t know him anymore! It is true that Sonny has been a different Sonny than what she was used to or was expecting since his return from Nixon Falls!

Y&R Spoilers: Nikki And Diane Go At It Again