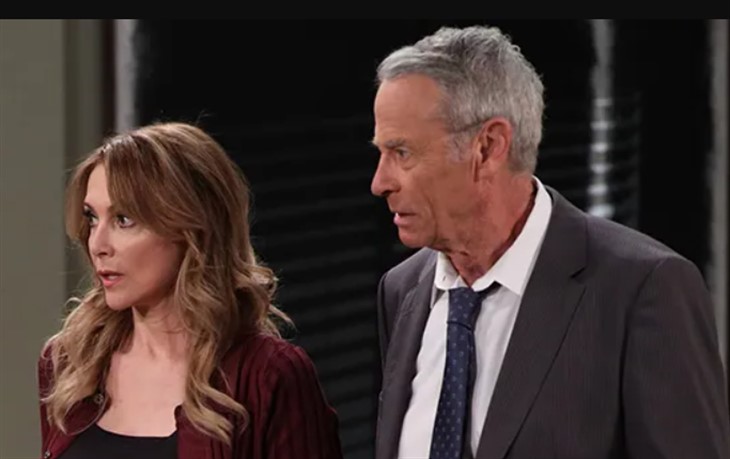 General Hospital spoilers reveals Robert Scorpio (Tristan Rogers) has been suspicious for some time that Holly Sutton (Emma Samms) was withholding the truth from him. Recently, he laid a trap for Holly and she took the bait right to Victor Cassadine (Charles Shaugnessy), proving to Robert his hunch was right all along. Now that Holly has confessed her sins to her ex-husband, he’s going to do what he can to protect her and her secret while seeing to it that Victor goes down for what he’s done. Working together, they’re going to fool Victor into thinking he’s won.

Robert meant what he said. He’s not going to tell anyone that Holly was the person who shot Lucy Coe (Lynn Herring) — or that she’s still alive. As much as it pains him to let the people he loves suffer and think they’ve lost Lucy, he can’t jeopardize Holly or Ethan Lovett (Nathan Parsons) that way.

General Hospital spoilers hint Victor has charged Holly with the task of stealing Leopold Taub’s (Chip Lucia) necklace, and while she wasn’t sure at the outset how she could pull it off, she knows Ethan’s life is on the line. So, she must come through for him. When Holly finds Robert at the Metro Court Hotel — and quite literally with the necklace in a briefcase that is cuffed to his wrist — she will waffle on whether or not to tell him about Victor’s next step. Either way, Robert is going to pay a price as he comes to in a hospital bed knowing he’s been drugged.

Holly has been pretending to be in Victor’s charge for the last day or two, and he is already growing suspicious of her. With a certain amount of constant paranoia that Holly has told Robert the truth, Victor is still trusting her to follow his commands in secret. While it may look like Holly has drugged Robert just to get her hands on that necklace, the truth is, the necklace she brings back to Victor will be a fake. Of course, Victor is no dummy, and he’s going to realize it’s a fraud pretty quickly. However, this ruse will buy Holly and Robert enough time to possibly get Ethan set free or get a leg up on Victor’s next move before it’s too late. Will Holly pretend to be as fooled as Victor was, and if so, will he believe her? Keep checking back for more GH news and updates just ahead.