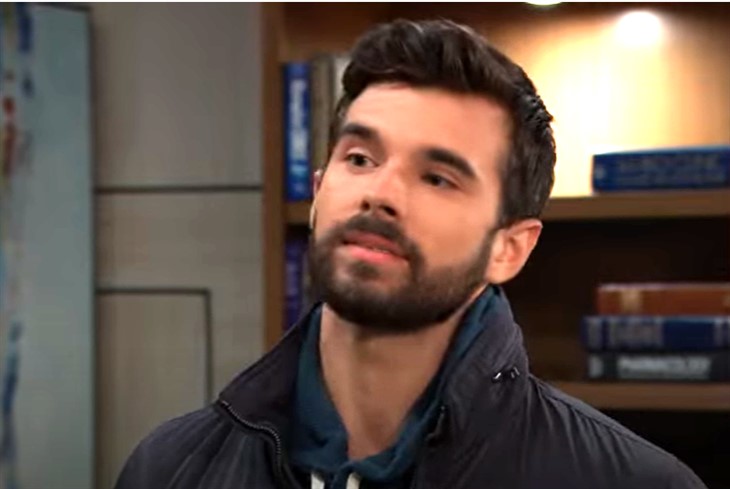 General Hospital spoilers tease that Harrison Chase (Josh Swickard) is one of the most noble, law-abiding police officers ever to serve in Port Charles. But the last few months, Chase’s sterling record has been tarnished, although he would say it was all worth it in the end. Chase was one of the first people to realize that Maxie Jones (Kirsten Storms) was the real mother of Brook Lynn Quartermaine’s (Amanda Setton) baby!

General Hospital spoilers show Valentin wasn’t happy with this turn of events and badmouthed Brook Lynn. Chase punched Valentin and received a six month suspension from the police force for his actions.

Because of the ongoing deception about the baby, Chase could be in serious trouble. He is sworn to uphold the law, and he let investigators search for a baby that wasn’t really missing. Added to the fact that he is already on suspension could mean that Chase will suffer repercussions, including a possible dismissal from the police force. Chase certainly won’t regret his actions, but they could come at a terrible price! Chase may not have thought about the long-term impact his deception could have on his career!

General Hospital Spoilers – Harrison Chase Only Knows How To Be A Cop!

Being a cop is in Chase’s blood. He’s good at it and although the choice was his, he might come to resent Brook Lynn for his career troubles. General Hospital spoilers indicate Chase doesn’t know how to be anything besides a police officer so if he loses his job, it could cause an identity crisis for Chase who was only trying to do the right thing for everyone involved.

Will Chase be considered a hero for his actions? Or could he lose his job? Will he resent Brook Lynn for the choices that he made? Anything can happen in Port Charles so stay tuned to General Hospital airing weekdays on ABC. And don’t forget to check back right here regularly for all your General Hospital news, information and spoilers!

1000 Lb Best Friends: TLC, What Were You Thinking?