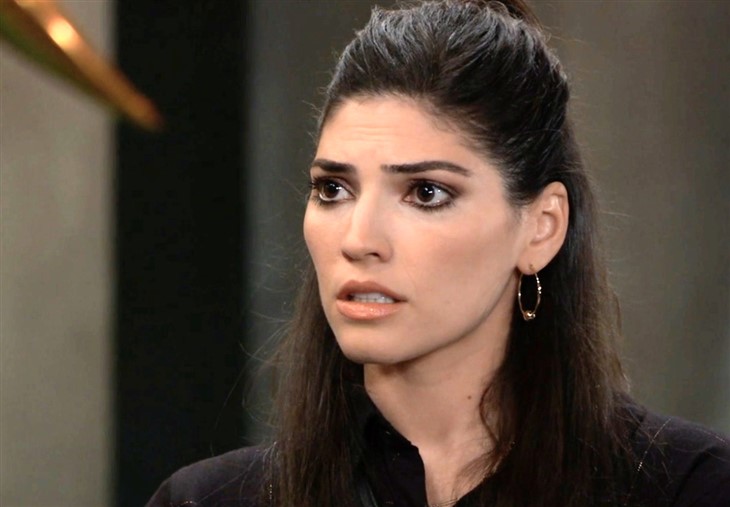 General Hospital (GH) spoilers and updates for Tuesday, May 24 tease emotions play out, decisions are made, and confrontations ramp up on the next GH!

General Hospital Spoilers – I Need A Plan B

Brook Lynn Quartermaine (Amanda Setton) was listening to a radio station and heard one of her songs completely butchered and she was upset – she vented to Drew Cain (Cameron Mathison). She explained the situation with Linc Brown (Dan Buran) and how he owns all her songs and they were her heart and soul, how could he turn them into mockery?

Drew told her she was going to have to fight for her rights and to get her songs back, and she put a call into Harrison Chase (Josh Swickard).

Chase comes, and now he and Brook Lynn are talking and sitting at an outside table. She tells Chase that she needs a Plan B. Chase asks for clarification, and if that’s where he comes in!

Curtis Ashford (Donnell Turner) is in his father’s room at New York Methodist Hospital, where he was pleading with Marshall Ashford (Robert Gossett) to wake up! Curtis had tears in his eyes as Marshall had woken up frightened and he assured him he was his son and he was there!

Curtis is still wiping his eyes as he tries to comfort his father, and tells him he’s not going anywhere, and neither is Marshall! There had been a chance that Marshall would not wake up, after Dr. Yuan (uncredited character) told him that he had a head injury in addition to having lost a lot of blood!

But Curtis is there and he’s not going anywhere until they can make amends in a very real way!

General Hospital Spoilers – Grab This Chance With Both Hands!

Stella Henry (Vernee Watson) has now arrived at New York Methodist Hospital to support her family, even Marshall after someone put in a call to her! Stella is being very encouraging to someone as she tells them to grab this chance with both hands, and it could be either Curtis or Marshall.

The bets are on Marshall since she knows what really happened way back when and Curtis has been wanting the truth, and Marshall has not been willing to give it.

Now, in this life and death situation is the perfect time for Marshall to tell his side of the complete story of what had happened. But will he still be too stubborn and ashamed to do so even with his son crying at his bedside showing complete acceptance?

At General Hospital, where Elizabeth Baldwin (Rebecca Herbst) has come for further tests to find out why she’s sleepwalking, Dr. Kevin Collins (Jon Lindstrom) deduced there may be deeper reasons.

This has been a very trying and frightening process for both Elizabeth and her family, but with her medical tests coming back clear she’s ready for some answers. Cameron Webber (William Lipton) stands with Kevin in the door of the examining room where his mother is, near tears as he asks a poignant question.

“You’re sending Mom away?” – obviously Kevin has recommended further tests and treatment outside of the hospital, to keep Elizabeth and her family safe. This is not a judicial commitment, it is a quest for answers and appropriate treatment and Cameron will be assured of that.

General Hospital Spoilers – You’ll Have To Let Me Go

Still at GH, Elizabeth informs Dr. Hamilton Finn (Michael Easton) of her decision as he, Kevin and Cameron all advocate for her. She obviously is on board with the intensive therapy at Shadybrook or possibly Ferncliff as she tells Finn that he has to let her go. One thing is for certain – Elizabeth is ready for answers and to find out what is causing this bizarre behavior; another thing is also for certain.

Elizabeth and her family won’t have to worry about her being put in Spring Ridge with Kevin’s psycho brother Ryan Chamberlain (Jon Lindstrom)! She will need a facility that possibly specializes in dissociative identity disorder therapy and maybe post-traumatic stress disorder therapy since sleepwalking obviously doesn’t explain everything!

GH Spoilers – If You Want To Win, There’s Only One Way To Play This!

At the courthouse, Attorney Diane Miller (Carolyn Hennesy) is coaching Michael Corinthos (Chad Duell) and Willow Tait (Katelyn MacMullen) before the court is called to order.

Carly Corinthos (Laura Wright) is also there, and Diane tells them all that if they want to win, there’s only one way to play this! Diane can be expected to tell them to play to win, and possibly play dirty if the occasion calls for it! Nina Reeves (Cynthia Watros) is playing to win to have a part in her grandson Wiley Corinthos’ (Viron Weaver) life and visitation and she has promised to fight fire with fire!

Previous GH episodes revealed that Sonny Corinthos (Maurice Benard) could not be talked out of testifying on Nina’s behalf at the visitation hearing.

Michael has obviously already burned his bridges and cut his ties with Sonny, so Sonny doesn’t care what Michael thinks or does! All Sonny cares about now is Nina getting to be a real up close and personal grandma to their mutual grandson. She pleads with him, please, it’s best if he goes – but Sonny will refuse. He’s not leaving her side or the court hearing!

B&B Spoilers: Finn Is Alive, But Nobody Knows