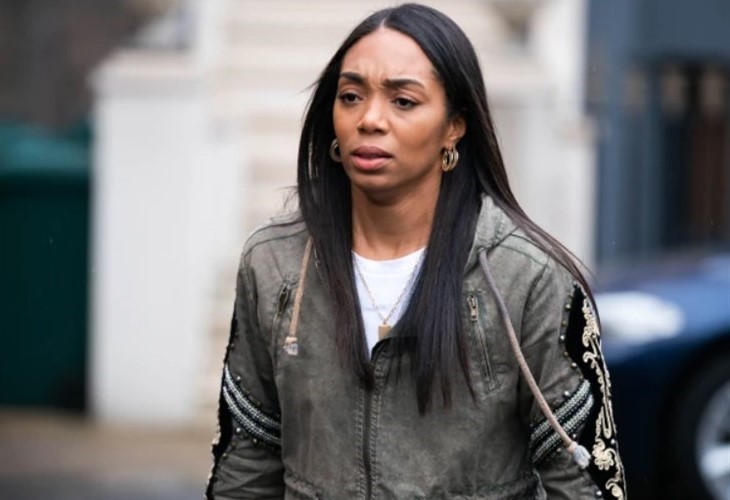 EastEnders spoilers and updates tease that Chelsea Fox (Zaraah Abrahams) will have to make a huge decision next week. More problems arise when she finds out that Gray Atkins (Toby-Alexander Smith) failed to pay their bills.

Next week, Chelsea will think about Patrick Trueman’s (Rudolph Walker) offer to house swap. But she’ll also get some bad news. She’ll learn that Gray didn’t pay for their mortgage for several months and they’re on the verge of losing their house. Kim Fox (Tameka Empson) will help her in managing Chelsea’s finances so the latter would keep hold of her property.

Kim and Whitney will be impressed by Chelsea’s skills when she helps Dotty Cotton (Milly Zero) in her bar. Chelsea will be annoyed when Kim and Whitney encourage her to work at the club. But after talking to her mum Denise Fox, Chelsea will reconsider their suggestion.

EastEnders Spoilers – Toby-Alexander Smith Opens Up About His Final Moments

Toby-Alexander Smith’s alter ego, Gray Atkins, exited the show last March 10. Fans finally got to see Gray get his comeuppance. He knew that the audience wanted to see Gray pay for what he did to Chantelle, Tina, and Kush. He said it was crucial for the show to make sure that justice prevailed.

“There was no room for him to have an easy way out and it would have been wrong if they’d have done that. I do think, from the audience’s perspective, it’s a satisfying ending to the storyline,” he said.

EastEnders Spoilers – For The Week Of April 25

Kat will be shocked when someone throws a smoke bomb into her house. She seems to have an idea who’s behind it. She tries to remain calm despite the incident but her fears will grow once again when she receives an unusual package. Kat then confides in Stacey Slater (Lacey Turner) that she doesn’t want to continue living in fear.

Elsewhere, Linda Carter (Kellie Bright) will have a confrontation with Honey and Kat. Linda will be forced to make a huge decision, which involves serving customers in The Vic, after getting a warning from Stacey.

Meanwhile, Stuart will get a health update from his doctor. He’ll be instructed to take painkillers, which he follows albeit reluctantly. Violet “Vi” Highway (Gwen Taylor) will also start to get annoyed when Stuart continues to avoid baby Roland.

Days Of Our Lives Spoilers: Jan’s Prison Release, Moves In With Shawn