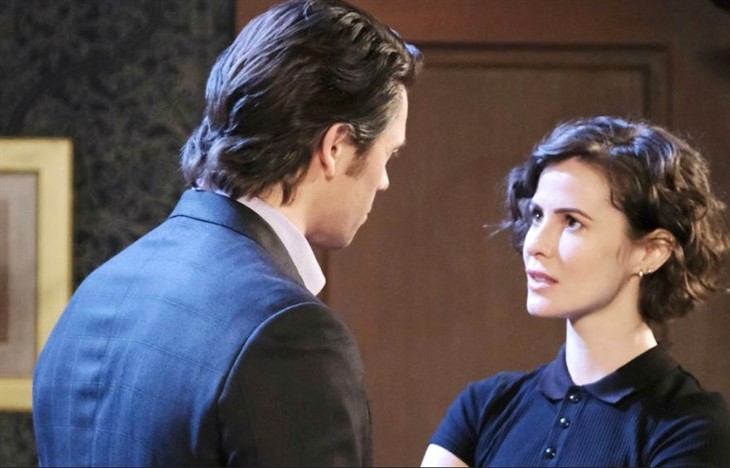 Days of Our Lives spoilers reveal that Xander Cook (Paul Telfer) and Sarah Horton (Linsey Godfrey) start investigating Abigail DiMera’s (formerly played by Marci Miller) murder. Sarah needs to know the truth and who really killed Abigail. Xander and Sarah come across a clue, which leads them to Ava Vitali (Tamara Braun). It seems Ava has a big decision to make.

DOOL spoilers reveal that Lucas Horton (Bryan Dattilo) began remembering pieces of what happened the night Abigail was murdered. One memory that was recovered during Marlena Evans’ (Deidre Hall) hypnosis featured Sarah. Lucas remembers Abigail screaming and immediately after, Sarah fled down the stairs and out the door.

However, when Sarah was questioned by Detective Jada Hunter (Elia Cantu), she denied seeing Abigail that night. Although Sarah planned to speak with Abigail, she never went to the DiMera mansion.

Xander and Sarah need to get to the truth. Not only was Abigail a cousin of Sarah’s, but the doctor needs to clear her name. The only way to do that is to find out who really killed Abigail. As with most soap opera detectives, Salem’s officers probably won’t find out the truth on their own. It will be a civilian who figures it out.

Days of Our Lives spoilers reveal that Xander and Sarah quickly come across a promising lead. However, this clue seems to center on Gwen Rizczech (Emily O’Brien). There is no way that Gwen is going to admit to killing Abigail. Somehow, Xander and Sarah figure out that Ava is connected.

Perhaps Xander and Sarah are able to get the visitor log from someone at the prison. As fans know, Gwen placed a call to Ava, who went to see her that day. Later that night, Gwen was able to sneak out of prison undetected, then sneak back in.

It appears that Ava doesn’t confirm anything about helping Gwen escape from prison. However, Xander and Sarah don’t give up. It is teased that during the week of August 8, “Xarah” try to get Ava to turn on Gwen.

Ava might help Gwen from time to time but they aren’t exactly friends. In fact, Ava lashed out at Gwen for being so cold-hearted. Coming from a mob princess, that’s pretty harsh. So, it might not take much to get Ava to tell “Xarah” everything she knows. There would have to be something in it for Ava, though.

Will Ava confess to helping Gwen escape the night of Abigail’s death? Is Gwen guilty of murdering her sister, or is it just another red herring? Share your thoughts and remember to keep watching the NBC soap to see what happens next.