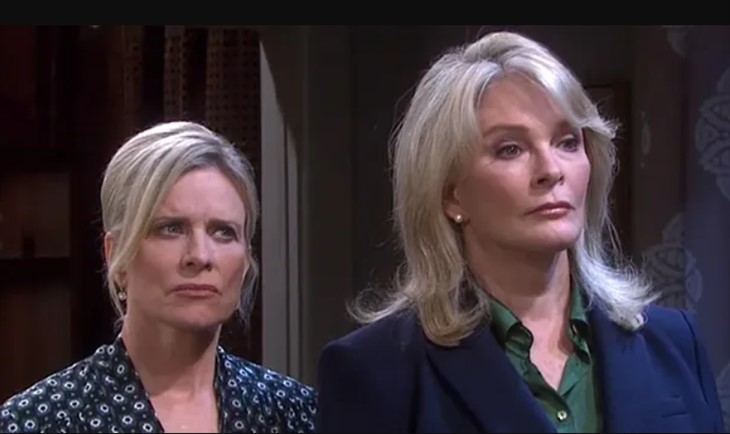 Days of Our Lives spoilers and rumors tease that after someone steals the orchid needed to make more serum, the three women infected by Orpheus (George DelHoyo) will die. But they will make a trip to heaven, and they will be sent back – might they bring Susan Banks (Stacy Haiduk) with them?

No one can assume any less than that Susan dies in a horrific car crash in the car with Ava Vitali (Tamara Braun) since the car explodes in flames. Horrible enough, but St. Luke’s Church explodes in flames after a bomb is set at her funeral as well. It won’t be very long after that Kristen DiMera (Stacy Haiduk) is horrified to find the orchid she’s been keeping to make life-saving antidote for three women has been stolen.

That means Marlena Evans, (Deidre Hall) Kayla Johnson (Mary Beth Evans) and Kate Roberts Brady (Lauren Koslow) will die, because they won’t get their booster shots. A winter promo shows they arrive in heaven and Kayla sees someone they know-might it be Susan?

Days of Our Lives spoilers hint Kayla would remember so well when her brother Bo Brady (Peter Reckell) came to earth and resurrected Tripp Johnson (Lucas Adams). She and Steve Johnson (Stephen Nichols) had been allowed just a little peek and then he had to go back, although he also saved his grandson from Satan. But Bo is no longer there – when he comes to earth again it’s in the flesh, after Megan Hathaway (Miranda Wilson) resurrects him the same way she was. But it’s clear that they recognize someone in that in-between place; it could be Angela (Loretta Devine), but it could also be Susan. Susan was an innocent victim of Ava’s rage and revenge; surely she’d go to Heaven or at least to that in between place Marlena, Kayla and Kate do.

Susan did good things in her life, like use her psychic powers to find Ciara Brady Weston (Victoria Konefal) when she was presumed dead. She also fought hard against the devil in all his forms in Salem, including MarDevil, Johnny DiDevil (Carson Boatman) and AllieDevil (Lindsay Arnold). She’s a valuable asset against evil on earth, so she deserves to be given a second chance at life along with the three women –for Marlena, a third chance at least.

Marlena, Kate and Kayla are said to be sent on a mission from their in-between heavenly place. Susan will be a powerful asset to help them if she comes back also.