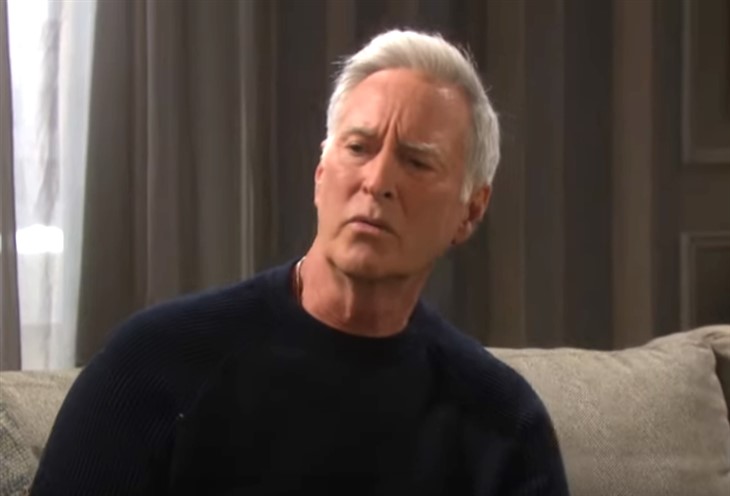 Days of Our Lives spoilers and updates tease that John Black (Drake Hogestyn) will be devastated. He’ll find out that Rex Brady’s (Kyle Lowder) antidote gamble didn’t pay off and Marlena Evans (Deidre Hall) is still in deadly danger.

Days Of Our Lives Spoilers – Orpheus Robbed The Lab

Viewers will recall that it was recently revealed that Orpheus (George DelHoyo) robbed Dr. Wilhelm Rolf’s (Richard Wharton) lab of a deadly toxin. Rolf has been working on an antidote, because he knew his master Stefano DiMera (Joseph Mascolo) wouldn’t have wanted Marlena harmed. Kate Roberts (Lauren Koslow) and Kayla Johnson’s (Mary Beth Evans) lives are also in danger because Orpheus administered the toxin while he had the three captive.

Days of Our Lives spoilers say Roman Brady (Josh Taylor) had come up with an idea and Rex ran with it; he wondered if it was the same toxin that he’d been poisoned with before by Orpheus. Rex had worked with Rolf many years ago, and he was able to synthesize the same antidote that cured his father and tried it on Marlena and the rest.

DOOL Spoilers – The Antidote Came From A Rare Orchid

The original antidote came from a rare orchid, but apparently the newer batch of toxin Orpheus stole from Rolf was a little different than the original. Rex must deliver the shocking and sad news to John that his new antidote hasn’t worked on Marlena and the others, and they’re all back to square one.

Somehow, they must find that rare orchid and start from scratch; the synthesized antidote doesn’t work and there is a good chance that Marlena, Kate and Kayla will die. The time clock is ticking away to find a cure that will work, even though what Rex was able to find did appear to be very similar to Roman’s illness. John is beyond upset, worried and frustrated, and again he tells Rex they have to get their hands on that orchid!

Days Of Our Lives Spoilers – The Race For A Cure

Little do they know that Rolf is working on a new cure and has one of the orchids in his possession, waiting for it to bloom; the flower holds the cure. There are those in Salem who know exactly where Rolf’s secret lab is, but they’re not telling; and all are associated with DiMeras. Li Shin, (Remington Hoffman) Kristen DiMera (Stacy Haiduk) and Stefan DiMera (Brandon Barash) all know about the lab, but perhaps only Kristen knows of Marlena and the others’ dire dilemma.

Rex is the genetically created son of Roman and Kate, and he if anyone besides Rolf himself would have been able to come up with an antidote. But the toxin is not responding to the synthesized antidote that Rex worked so quickly and carefully to make, and if a blooming orchid is not found, all three will die.