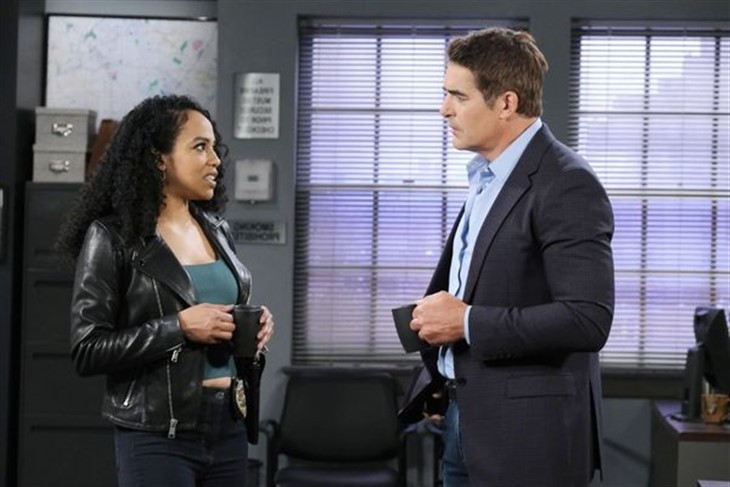 Days of Our Lives spoilers and updates tease that Jada Hunter (Elia Cantu) will make a stunning discovery while she and Rafe Hernandez (Galen Gering) are reviewing security tapes. They’re rewatching the video taken of Clyde Weston (James Read) fishing, which was his alibi for the night of Abigail DiMera’s (Marci Miller) murder and Jada spots an edit.

Now Jada and Rafe must reinvestigate Clyde’s alibi and see if anyone besides that security camera saw him that night. They have their forensics department study the tape closely and it’s discovered that the edits took place when Abigail was killed. The only thing is, Rafe knows that Clyde doesn’t have enough technical knowledge to edit the tape himself; he had to have had an accomplice helping him.

But who would Clyde know who would have such expertise? The only person Rafe can think of would be Orpheus (George Del Hoyo).

DOOL Spoilers – Orpheus Was In Prison

But then Rafe runs into a problem with that theory because Orpheus was still in Statesville Prison when Abigail was killed; who else would have helped Clyde? There was a breach of the computer system shortly before Orpheus, Kristen DiMera, (Stacy Haiduk) Dr. Wilhelm Rolf (Richard Wharton) and Gwen Rizczech (Emily O’Brien) were pardoned. But that still wouldn’t have affected this security tape because Abigail was murdered while they were all in prison; but still, Rafe has to bring Clyde back in.

Days of Our Lives spoilers say Clyde is none too happy because he and Nancy Miller (Patrika Darbo) just got engaged; he can’t explain an edit on the security tape, he was fishing. Clyde begins to wonder if someone is trying to frame him to draw attention away from themselves, there seems to be a lot of that going around these days.

Days Of Our Lives Spoilers – Clyde Weston’s In A Pickle

Clyde’s in a pickle for the time being, but soon the mystery will be solved; the true killer will be found and there will be no doubt. The person who edited the tape was editing themselves out, and had passed by as Clyde had his eyes on his fishing float. He didn’t even notice the person passing by in a hurry, with Abigail’s blood on them, if he had he’d have said, even he knows that’s suspicious.

Perhaps it’s the owner of the shop with the security camera that had footage of Clyde. Perhaps it’s someone else entirely unexpected; but it won’t be long before Abigail’s killer is revealed, and there won’t be any doubts.

Days Of Our Lives Spoilers: Gwen And Jennifer Face Off, Clash Becomes Violent!

B&B Spoilers: Ridge Cracks, Thomas Has A Break Down