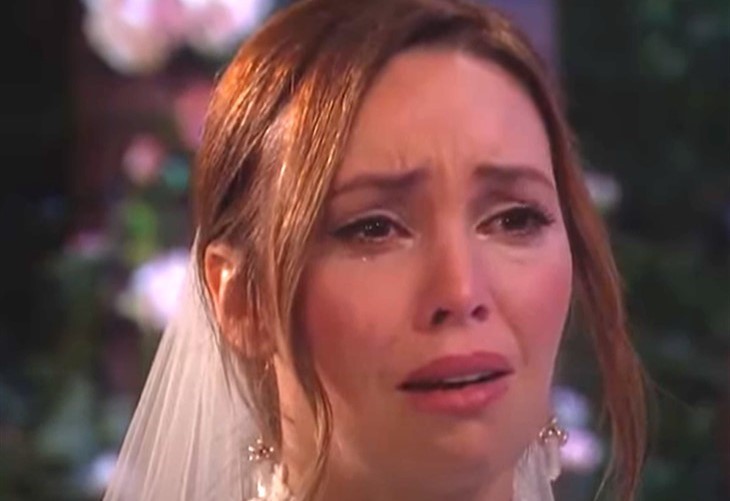 Days of Our Lives spoilers reveal that Gwen Rizczech (Emily O’Brien) is exposed during her wedding. Ava Vitali (Tamara Braun) gets immunity for testifying against Gwen. So, Gwen will probably get arrested on her wedding day. However, that doesn’t mean that the character is being written off. Perhaps Gwen uses an insanity defense and gets sent to Bayview.

Days Of Our Lives Spoilers – Abigail DiMera Gets Justice

DOOL spoilers reveal that Abigail DiMera (Marci Miller) got a call from Ava. Abigail went down to the police station demanding to know what Ava had to say. At first, Ava tried to play hardball and wanted an immunity deal before giving Abigail any information. However, Abigail wasn’t playing that game.

Ava had no choice but to confirm Gwen was responsible for her kidnapping. That isn’t all that Abigail will discover, though. Ava tells Abigail why the antidote made Sarah Horton (Linsey Godfrey) worse. Abigail gets her ammunition while Ava gets her immunity deal from DA Melinda Trask (Tina Huang).

Ava makes a deal with Trask which requires her to testify against Gwen. That means there is going to be an arrest and a trial. Abigail doesn’t expose Gwen right away, though. Abigail decides to do it in the most humiliating and painful way possible.

Gwen is exposed at the altar, which leaves Xander Cook (Paul Telfer) completely disgusted. It is suggested that Gwen will not only be exposed at her own wedding but arrested as well.

Days of Our Lives spoilers reveal that Abigail tells Jennifer Horton (Melissa “Missy” Reeves) about Gwen’s actions. However, it appears that Jack Deveraux (Matthew Ashford) is left in the dark. At least until the whole truth comes out at the wedding. It is teased that Jack tries to do damage control.

However, there isn’t anything he can do when Gwen is arrested for her crimes. Jack might be able to get her a lawyer but that’s about it. Plus, he needs to consider how he responds because one of Gwen’s victims was Abigail.

One thing is for certain: Ava’s testimony will be damaging. It will be hard for Gwen to get away with her crimes.

There is no news on Gwen leaving the NBC soap. So, we have to wonder if she will use an insanity defense. If so, Gwen might not go to prison but could be sent to Bayview for treatment. If that’s the case, then expect Gwen to come back to Salem at some point. Is there any possibility of Gwen being redeemed? Has the soap written Gwen into a corner? We will have to keep watching to find out.