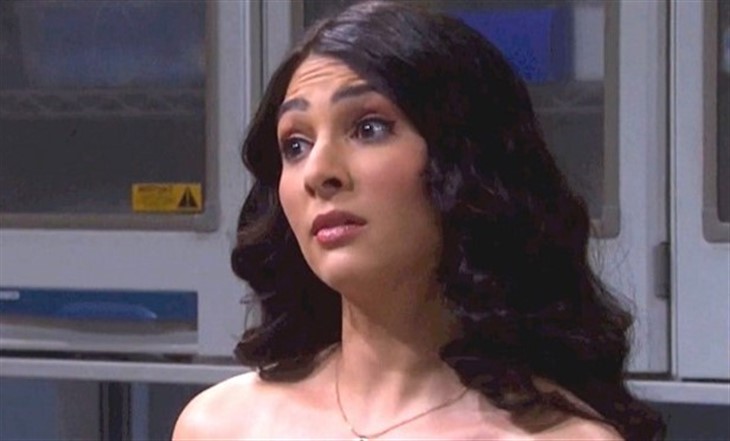 Days of Our Lives spoilers and updates tease that Gabi Hernandez (Camila Banus) is upset by Stefan DiMera’s (Brandon Barash). She continues trying in vain to win him back, even though he claims not to remember their great love and fixates on Chloe Lane (Nadia Bjorlin).

Days Of Our Lives Spoilers –  Li Shin Who?

Gabi accepted Li Shin’s (Remington Hoffman) marriage proposal in her mind but Stefan’s still in her heart, even though she took off his ring and tried to move on. She is still suspicious of Li’s calls and meetings that she caught him with regarding Dr. Wilhelm Rolf (Richard Wharton) but now figures it had to do with Stefan’s resurrection. When compared to the love and passion she shared with Stefan, she thinks “Li Shin who?” when it comes to him.

Gabi remembers how hate and manipulation turned unexpectedly to true love and passion between her and Stefan before. Might Stefan not think “Chloe Lane who?” with his fixation on Chloe again like he did before if Gabi tries hard enough?

Gabi wants to give it one last try to win Stefan back before fully committing to a marriage to Li, and she thinks what worked before might work again. In theory, it should work even better since she loves Stefan now, and she’s not using him or hating him, although she is manipulating him just a tad. It took a while and a lot of seduction and passionate lust before it turned to a deep love the last time, and it might take that much or more again.

She truly believes that right now, Stefan has amnesia from the time before he and she bonded and he was still involved with Chloe. She determines to bring his memory back by force if she has to, she cannot and she won’t lose Stefan again, and doesn’t care what Li thinks.

Days Of Our Lives Spoilers – She’ll Try To Be Patient

Gabi decides to recreate that moment when hate turned to love for Stefan; she remembers every detail vividly, and she decides to trick him by setting an urgent business meeting. Gabi has been lurking and listening, and she knows he’s moved back into the DiMera mansion and even into their old rooms, and she is having the meeting there. EJ DiMera (Dan Feurriegel) is too involved with distracting Ava Vitali (Tamara Braun) and his son Johnny DiMera (Carson Boatman) with an offer, possibly involving stock so he won’t know.

But even though Gabi recreates the event perfectly down to every detail, Stefan is angry and feeling trapped and set up. All he has in his mind is winning Chloe back, and Gabi isn’t even on his radar.