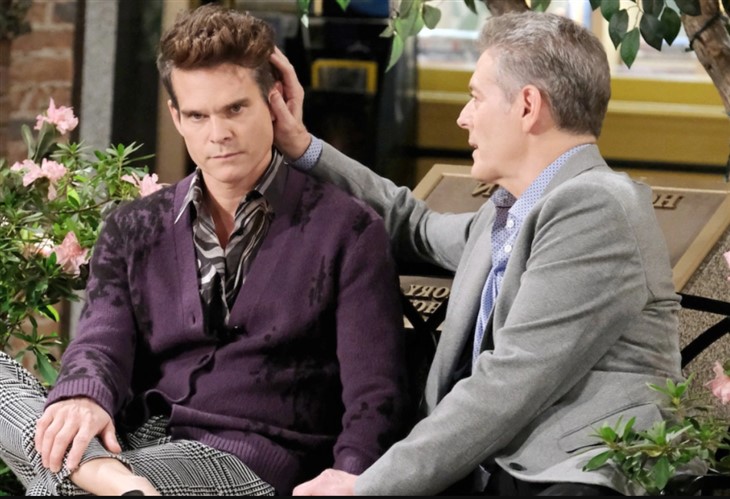 Days of Our Lives spoilers and updates tease that Craig Wesley (Kevin Spirtas) and Leo Stark (Greg Rikaart) will have a tension filled reunion. Craig returned to Salem very unexpectedly, perhaps hearing through the grapevine there may be a Chief of Staff opening at Salem University Hospital.

Days Of Our Lives Spoilers – Leo Stark’s In Jail Again

Leo asked Gwen Rizczech (Emily O’Brien) to brainstorm over who might have framed him for Sonny Kiriakis’ (Zach Tinker) stabbing and Abigail DiMera’s (Marci Miller) murder. After ruling out Jackie Cox (Jackie Cox) he suggested Craig might be angry enough after the ridiculous suggestion of Nancy Miller (Patrika Darbo), Gwen texted Rafe Hernandez (Galen Gering). Rafe came to Gwen’s hotel room immediately and arrested Leo again and brought him to the station and put him in a cell.

Day of Our Lives spoilers say Leo is none too pleased with his “only friend” for throwing him under the bus again let alone being back in a jail cell. But he’s really thrown when he gets a visitor whom he never expected to see again in a million years.

DOOL Spoilers – Why Are You Even Here?

When Leo finds his visitor is his ex-fiancé Craig, he is at a loss as to why he is even there; Craig claims to feel guilty. He says he feels guilty for bringing Leo back to Salem to begin with, and is afraid that he might be the reason Leo was driven to kill.

As one can imagine, Leo doesn’t exactly exude love and thankfulness over those statements, especially since he told Rafe he thought Craig may committed the crimes and framed him. The two ex-lovers soon get into an argument and sling accusations at one another regarding the murder and the attempted murder. At this point, neither Craig nor Leo really believe the other and Leo certainly isn’t going to forgive Craig even though he attempted to offer an apology.

Days Of Our Lives Spoilers – Break It Up Boys

No one is surprised that Craig and Leo start getting loud and Rafe himself has to intervene, telling them to break it up. With Leo behind the bars and Craig on the outside at least they can’t strangle each other, with Leo being in a sort of protective custody. Rafe decided to put Leo in the cell and let visitors visit with him in it since he knew if Chad DiMera (Billy Flynn) came he’d endanger the suspect.

Rafe can’t just go and arrest Craig until he finds evidence that he was even in town when the attacks occurred. While it looks like the case will be cracked wide opened and solved by the end of the week, Rafe doubts that Craig’s the culprit.