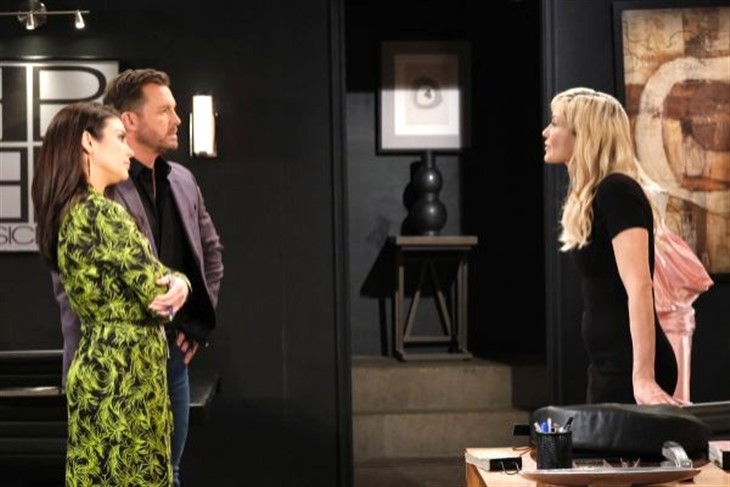 Days of Our Lives spoilers and updates tease that Brady Black (Eric Martsolf) and Chloe Lane (Nadia Bjorlin) will be disturbed by Kristen DiMera’s (Stacy Haiduk) strange behavior. Kristen’s behavior will seem very un-Kristen like and they’ll wonder if it’s really her or an imposter in a Kristen mask.

Days Of Our Lives Spoilers – Is It Really Kristen DiMera?

Kristen is acting very strangely and un-Kristen like and Brady and Chloe are confused and disturbed. She’s not asking or demanding Rachel Black (Finley Rose Slater) or making any threats. As a matter of fact, she’s not even paying any attention to them at all, and going about her business; is it really Kristen?

Days of Our Lives spoilers tease Brady and Chloe know this woman is not Susan Banks (Stacy Haiduk) or any of her sisters and Brady decides to investigate. He calls to her and she answers but she merely tells him she’s busy and scurries away.

DOOL Spoilers – What Could She Be Up To?

Now Brady and Chloe become suspicious, and wonder what Kristen could be up to; is she acting disinterested and busy merely to throw them off the track? Brady knows Kristen better than nearly anyone else in Salem, and acting aloof, especially when he’s suing for sole custody of Rachel is just not behavior that Kristen normally displays.

Normally he’d be on his guard, expecting Kristen to try and attempt a child snatch and run off with their daughter, so this aloofness and busyness is really scaring him. It’s scaring Chloe too, and they decide that Rachel should maybe visit her half-brother Tate Black (Colin and Kyle Schroeder); Brady contacts Theresa Donovan (Jen Lilley) to make arrangements. Brady and Chloe don’t know whether to consider Kristen’s bizarre behavior a mask on an horrible impersonator, a plot, or if she’s had a breakdown.

Days Of Our Lives Spoilers – Could Kristen DiMera Be Ill?

Brady and Chloe also wonder if Kristen could be ill, and she’s acting aloof and distracted because of a dire diagnosis; there’s really no way they can find that out. Brady doesn’t have any sort of healthcare power of attorney over Kristen because they’re not married and it never came up for discussion when they were together. They do know that Kristen has been seen with Dr. Wilhelm Rolf (Richard Wharton) although it’s not known what they’ve discussed, but Rolf is her physician of choice.

Kristen is just plain acting odd and they don’t know what to think – her mind is definitely not on her work at Basic Black. All the heavy assignments that seemed busywork for Chloe have ended as well; what could be going on with Kristen?