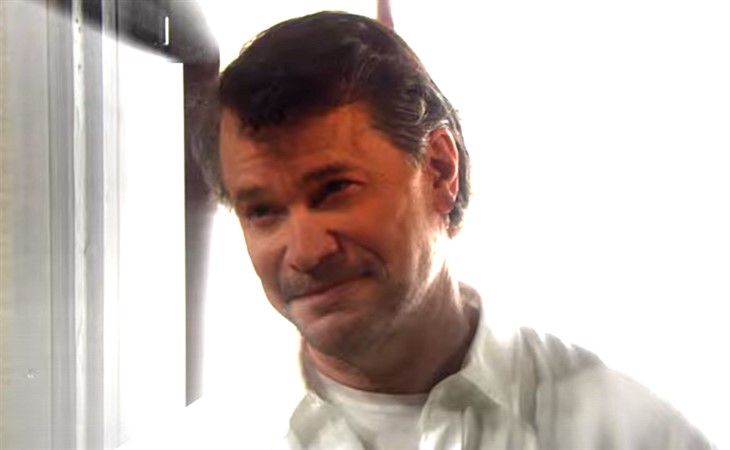 Days of Our Lives spoilers and updates tease that Bo Brady (Peter Reckell) returns as a ghost and comes to the rescue! He’ll come in response to his daughter Ciara Brady Weston’s prayers (Victoria Konefal) and help his old friend Steve “Patch” Johnson (Stephen Nichols) with a miracle as well on DOOL!

Longtime DOOL viewers will remember that Bo is actually the reason that Steve has to wear a patch over a missing eye! The two were together in the Merchant Marines and were good friends until a woman named Britta Englund (Amy Stock-Poynton) came between them. However, Britta turned out to be a spy; they agreed when she asked them to get tattoos, – the tattoos were a code for secret bonds she was hiding.

Steve and Bo got into a knife fight over her, resulting in the loss of Steve’s eye and the reason for his nickname of “Patch” but they eventually made up. Steve eventually joined the ISA and later formed “Black Patch” with John Black (Drake Hogestyn) while Bo went into police work and became a Salem PD detective.

Shortly before Evan Frears (Brock Kelly) attacked Ciara in her hospital room at Salem University Hospital, Ciara prayed to Bo to save their baby, named after him. The elder Bo’s name is actually Marcus Aurelius Brady, but the baby’s name is Bo Brady Weston (uncredited infant). Ben Weston (Robert Scott Wilson) soon came to the rescue, knocking out Frears, and Shawn Brady (Brandon Beemer) arrested him. In this week’s preview, Bo is seen in a cloud of bright light as he comes in response to Ciara’s prayers as Ben and Ciara stand in a hospital room. This seems to be after Ciara is able to rescue baby Bo from the center of the pentagram in the cemetery; the newborn is likely dehydrated.

Steve and Ava Vitali’s (Tamara Braun) son Tripp Johnson’s (Lucas Adams) life is also in danger, after sacrificing himself to save Allie Horton (Lindsay Arnold) from the devil! Tripp throws himself out of the tower window at St. Luke’s after satan jumps from Allie into him and tries to make him kill her! In the hospital, Dr. Kayla Johnson (Mary Beth Evans) tells a devastated Steve and Ava there is nothing that can be done for Tripp!

Then Bo shows up at the door again, this time at Tripp’s room in a cloud of light as a weeping Steve looks at him in amazement! Bo nods his head as to say it’s really him!

In the preview, Bo first goes to Ben and Ciara, who are obviously worried over Baby Bo; AllieDevil had not fed the newborn from the time she kidnapped him! The baby’s soul may also be in danger since part of the dark ritual may have been performed by the time Ciara got to him. Bo smiles and says “hey, there little one” to her questioning if she’s seeing things!  When he gets to Steve and Tripp, Bo tells a devastated Steve “I’ve got him”!