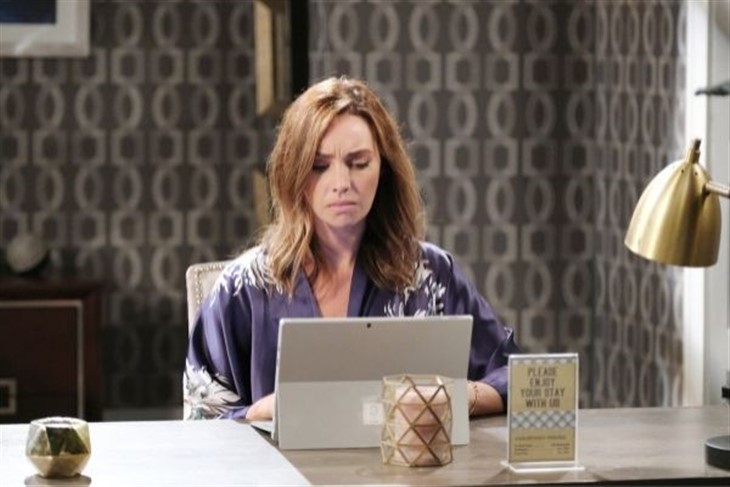 Days of Our Lives spoilers for the week of January 17 reveal that Gwen Rizczech (Emily O’Brien) finds a familiar face at her door. Hints seem to suggest that it could be Sarah Horton (Linsey Godfrey). However, is it really Sarah or could Ava Vitali (Tamara Braun) be handling the problem of Abigail DiMera’s (Marci Miller) investigation?

Days Of Our Lives This Week Spoilers – Kristen DiMera Captured

DOOL spoilers reveal that during the week of January 10, Steve “Patch” Johnson (Stephen Nichols) and Kayla Johnson (Mary Beth Evans) go to Italy. “Stayla” goes undercover and checks out the Italian convent where Kristen and Lani Price-Grant (Sal Stowers) fled to when they became friends a few years ago.

Kayla is seen in photos on social media in nun attire. The character is seen posing with Ellen Crawford, who appears to be Mother Superior or another kind of leader in the convent. It is teased that Steve and Kayla get in a dangerous situation when they finally face Kristen. However, it is expected that Steve and Kayla do apprehend Kristen.

Meanwhile, Abigail has asked for all the records from the DiMera pilots around the time that Sarah left Salem. Abigail doesn’t expect to see anything unusual. The reporter actually expects Xander Cook (Paul Telfer) to come up with something from the Kiriakis pilots. However, Abigail is surprised when she gets a lead. Then, she goes to talk to one of the DiMera pilots, who uncovers startling information.

Days of Our Lives spoilers reveal that Gwen is completely panicked over Abigail and Xander’s investigation. During the week of January 17, Gwen gets a surprise visitor at her door. It is only stated that it’s a familiar face. However, that same week, Xander is shocked to find out that Sarah is back in Salem. So, Gwen’s visitor must be Sarah or someone who looks like the missing doctor.

Kristen was always the person who had masks of pretty much everyone in Salem. So, if someone was to impersonate Sarah, people would think it would be Kristen. However, if Steve and Kayla capture Kristen, then it can’t be her. At the same time, how would Sarah return to Salem as if nothing were wrong after being held hostage by Kristen for nearly a year?

That suggests someone unexpected has access to Kristen’s mask collection. It just might be Ava, who seems to be going full villain again. However, the truth is going to come out eventually. One person who doesn’t believe Sarah’s story is Abigail. It is likely that those who knew Sarah best might also be suspicious. Can they prove it or will everyone be forced to accept that Sarah wants nothing to do with her loved ones?