Days Of Our Lives Spoilers: Will Steve And Kayla Come To Tripp’s Rescue? 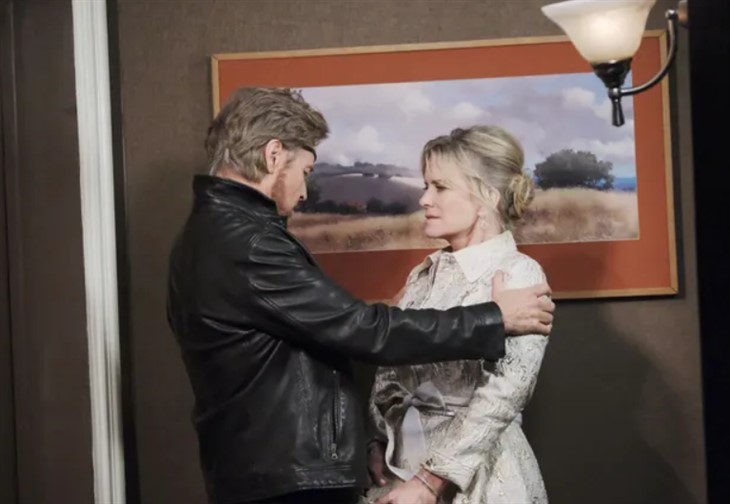 Days of Our Lives (DOOL) spoilers for Friday, November 18, 2022, reveal Stayla going on an adventure before things get very bad for Kayla.

Days Of Our Lives Spoilers – Is Tripp Jonson Really In Trouble?

Ava Vitali (Tamara Braun) truly alarmed Steve Johnson (Stephen Nichols) and Kayla Brady Johnson (Mary Beth Evans) when she showed them that photo of Tripp Johnson (Lucas Adams) tied up and being held at gunpoint. She suspected EJ DiMera (Daniel Feuerriegel) was behind all this, but Steve and Kayla could not be sure the photo was real.

However, just in case it is, the pair takes off for Seattle to try to find Tripp and rescue him from the mess his messy mother may have gotten him in. They go undercover to do some investigating and it’s a caper that feels like old times. They also better enjoy it because it might be the last one they have as Kayla is set to get sick again when she returns to Salem. Oh, that damn Orpheus (George Del Hoyo).

Tony DiMera (Thaao Penghlis) and Anna DiMera (Leann Hunley) can tell that EJ is in a bad state. He is not sure where his mother is, but he is sure that Ava has something to do with everything going wrong in his life and his thirst for revenge is powerful.

To that end, Tony and Anna try to reason with EJ and talk him out of doing anything insane, but it might be to no avail. Who would have thought they would one day be among the sanest of the DiMeras?

In real time, it has been well over a week since Bonnie Lockhart Kiriakis (Judi Evans) found herself locked in the Kirakis garden shed with Susan Banks (Stacy Haiduk), but it’s taken Justin Kiriakis (Wally Kurth) this long to notice that his wife is gone and something might be wrong.

Will Xander Cook (Paul Telfer) finally relent and let the women go free considering he really didn’t want to kidnap them to begin with? Or will something go very wrong before he gets a chance? Stream Days of Our Lives weekdays on Peacock by 6 am EST to see how these stories play out.