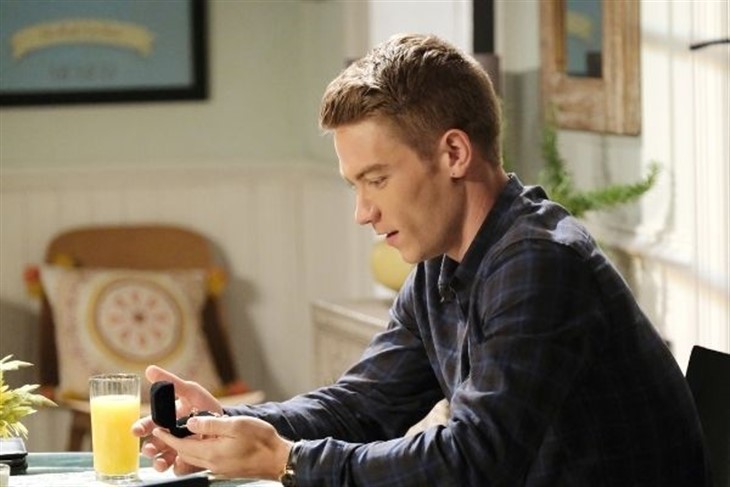 Days of Our Lives spoilers reveal that Tripp Johnson (Lucas Adams) proposes and Allie Horton (Lindsay Arnold) says yes. The couple will happily begin planning their wedding and future together. However, don’t expect the happy times to last. It won’t be Chanel Dupree (Raven Bowens) or Paulina Price (Jackée Harry) that exposes the betrayal, though.

DOOL spoilers reveal that Chanel loved Johnny DiMera (Carson Boatman). So, when “JoDevil suddenly dumped Chanel during the wedding reception, everyone was stunned. The person who was the most shocked, though, was Chanel. After Chanel stormed out of the DiMera mansion, Allie went to see if her friend was okay.

Chanel and Allie ended up sleeping together that night. Even though it is clear that Chanel still has feelings for her BFF, she’s covering. Chanel understands that Allie is conflicted and loves Tripp. Chanel became even more torn after Tripp came to check on her. Chanel realizes that Tripp truly is a wonderful person. Swallowing her feelings, Chanel doesn’t want Allie to ruin what she has with Tripp.

Tripp tells Roman Brady (Josh Taylor) that he plans to propose to Allie. Roman is thrilled for the couple and will help make it a perfect proposal. It was originally speculated that Allie might say no or confess the truth to Tripp during the proposal. It doesn’t appear that is going to happen, though. Allie ends up saying yes and the couple plans their future together.

Days of Our Lives spoilers reveal that head writer Ron Carlivati talked to Soap Opera Digest about February sweeps. One of the topics discussed was Allie and Tripp’s engagement. It was teased that Johnny aka “JoDevil” will target his twin sister. In soaps, secrets always come out eventually, so expect Johnny to expose what Allie is keeping from Tripp.

Allie and Tripp haven’t been messing with the devil’s plans, though. So, what is the reason why “JoDevil” targets Tripp and Allie? The head writer explained to the magazine,

“Tripp proposes to Allie, and he and Allie are in this happy place planning their future. Again, the devil does not like to see happy couples, so Johnny stirs up major drama for them.”

Will the devil exposing Allie’s secret end up having a silver lining, though? Even though Tripp could be left heartbroken, maybe there is a reason for it. Is it possible that Allie’s soulmate isn’t Tripp, but Chanel? We will have to keep watching the NBC soap to see what happens next with this storyline.