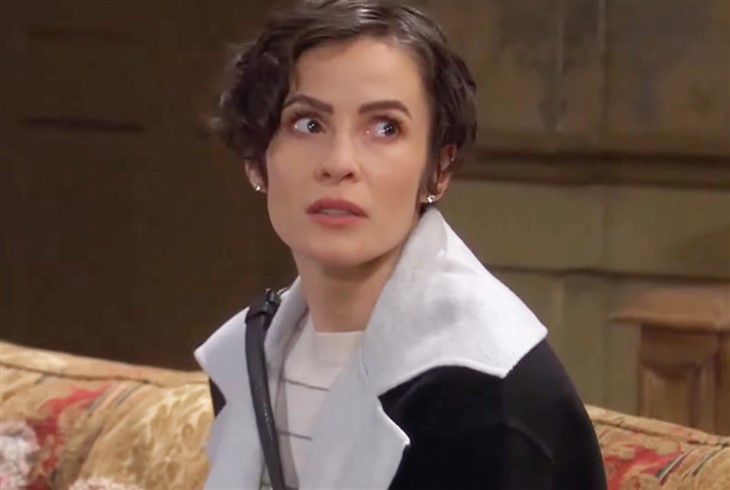 Days of Our Lives spoilers reveal fans have finally seen the real Sarah Horton (Linsey Godfrey). Sarah seems to be friends with Kristen DiMera (Stacy Haiduk) and isn’t trying to escape. Sarah is convinced she has to stay there to be safe and there is some kind of danger in Salem. So, what is going on with Sarah and why is she acting so friendly with her captor?

Days Of Our Lives Spoilers – Sarah Horton Not Trying to Escape

DOOL spoilers reveal that Sarah isn’t trying to escape her hostage situation. Sarah has a big bedroom with a window. Despite there being objects she could use to break the window or attack Kristen with, Sarah isn’t doing any of that. Sarah not trying to escape isn’t the only concern with this storyline, though.

Sarah and Kristen seem to be friendly with each other. This doesn’t seem like Sarah just playing Kristen, either. Sarah appears to genuinely like Kristen and seems to have gotten close to her. It’s almost as if Sarah not only trusts Kristen, but they are acting like old friends.

Sarah is determined to get back to Xander Cook (Paul Telfer). However, Kristen has convinced her that Salem is too dangerous right now. Sarah thinks she can protect Xander, but still isn’t trying to break free of her captivity. So, what exactly is the deal?

Days Of Our Lives Spoilers – Return Has Unexpected Twist

“After Abigail [DiMera, Marci Miller] gets too close to the truth, Gwen [Rizczech, Emily O’Brien] and Ava [Vitali, Tamara Braun] ship her off to a deserted island, where Kristen has Steve [Johnson, Stephen Nichols] and Kayla [Johnson, Mary Beth Evans]. Abigail will soon realize she’s not alone on the island. So, the stories are starting to converge and while they’re trying to get away, they ultimately come face to face with Sarah. I will say that her return has an unusual twist.”

We know that before Kristen kidnapped Sarah, she accidentally injected her with the powerful hallucinogen that DiMera Enterprises was developing. Fans may recall Dr. Wilhelm Rolf (William Utay) telling Gwen that it would melt Abigail’s brain.

Even though Abigail recovered, Sarah was shipped off to the island blubbering incoherently. Sarah thought that Kristen was Xander. Perhaps Sarah’s brain is still mushy from the drug, or Kristen could be continuing to drug her with those pies.

It’s quite possible that Kristen has brainwashed Sarah. Could Sarah think that Kristen is someone else such as Maggie Horton Kiriakis (Suzanne Rogers)? That would definitely make Sarah’s return to Salem extremely complicated.