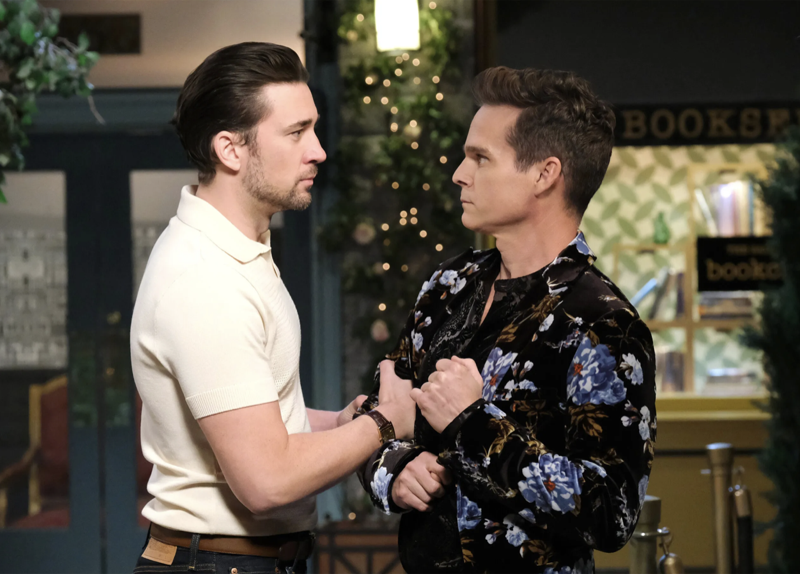 Days of Our Lives (DOOL) spoilers for Wednesday, August 17, 2022, reveal Leo trying to save himself and Chad trying to bring him down.

Days of Our Lives Spoilers: What Will Leo Do Now?

Now that Leo Stark (Greg Rikaart) is in the Salem PD interrogation room again and Chad DiMera (Billy Flynn) knows he was in the DiMera tunnels the night Abigail DiMera (Marci Miller) died, Chad and Shawn Brady (Brandon Beemer) finally decide to search down there and come up with all of Leo’s living essentials while he was making himself at home.

Meanwhile, Leo and his lawyer try to talk their way out of the trouble he is in, but it will be easier said than done when his fingerprints are found everywhere. Leo still insists he is absolutely not a murderer and he may be willing to give up the actual culprit — or who he thinks is the actual culprit — just to save himself.

Alex Kiriakis (Robert Scott Wilson) has been making his way through Salem mostly shirtless looking at every woman he can while causing chaos in the Kiriakis mansion. He has been trying to get along with his brother, Sonny Kiriakis (Zach Tinker), but it hasn’t been easy.

Now, it turns out Sonny might be a bit naïve as his brother tries to get one over on him. What kind of games his Alex trying to play? He really does seem more like his biological mother, Angelica Deveraux (last played by Morgan Fairchild) every day even if Adrienne Kiriakis (Judi Evans) did raise him.

Orpheus Is Up To His Old Tricks

Marlena Evans (Deidre Hall) couldn’t believe it when Orpheus (George Del Hoyo) showed up in her office asking her to be his son’s therapist. After all, they have been mortal enemies for years and Orpheus once kept Marlena hostage to raise his children for months on end.

Now, he surprises Steve Johnson (Stephen Nichols) and Kayla Johnson (Mary Beth Evans). This can’t be good as this is Orpheus who is involved, but Steve and Kayla are due for a big shock this week that involves Stephanie Johnson (Abigail Klein). Does Orpheus have anything to do with it? Stay tuned to Days of Our Lives weekdays to see how these stories play out.