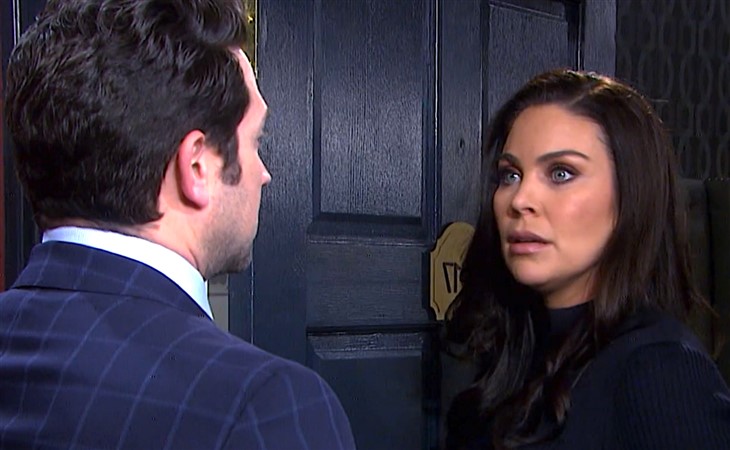 Days of Our Lives spoilers reveal that Kristen DiMera (Stacy Haiduk) forced Brady Black (Eric Martsolf) to dump Chloe Lane (Nadia Bjorlin). As Kristen continues making demands, Chloe will be confused and angry. However, Stefan DiMera (Brandon Barash) comforts Chloe. Could the truth about Brady and Kristen come too late? Will Chloe have already fallen in love with Stefan?

DOOL spoilers reveal that Dr. Wilhelm Rolf (Richard Wharton) brainwashed Stefan. Instead of reuniting with Gabi Hernandez (Camila Banus), Stefan can’t stand the sight of her. So, fans have been seeing Stefan try to woo Chloe.

Of course, at the time Kristen gave Dr. Rolf the order, Chloe was in a committed relationship with Brady. So, that made the situation a bit more complicated.

However, Kristen was able to make a deal with Brady. Since Brady could save his stepmother, he gave into Kristen’s demand and broke up with Chloe. That won’t be all that Kristen will make Brady do, though. Kristen will move in with Brady and Rachel Black (Finley Rose Slater). When Chloe finds this out, she will be completely baffled.

Days of Our Lives spoilers reveal that Chloe won’t react well to Kristen bragging about moving in with Brady. Chloe will question Brady about it, but doesn’t get the truth about the situation. Heartbroken and confused, Chloe will cross paths with Stefan.

Stefan will use the opportunity to get closer to Chloe. Stefan will listen to Chloe vent about Brady and Kristen. Then, Stefan will make his move. A photo in Soap Opera Digest shows Chloe smiling and having a good time with Stefan. So, it sounds like Stefan will score a victory and gets the chance to romance his love interest.

Brady does find out about Chloe and Stefan getting closer. When Brady tries to talk to Chloe about it, she dismisses him. After all, in Chloe’s mind, Brady did the same thing to her.

With that being said, there will come a time when Chloe finally learns the truth about Brady and Kristen’s “relationship.” When that happens, Brady will hope to get rid of Kristen and get back to Chloe. There is only one problem. Though. By the time the truth comes out, Chloe might already be in love with Stefan. How will Brady get Chloe back if she’s already committed to someone else?