Days Of Our Lives Spoilers: Stefan O. Shakes Everything Up In Salem 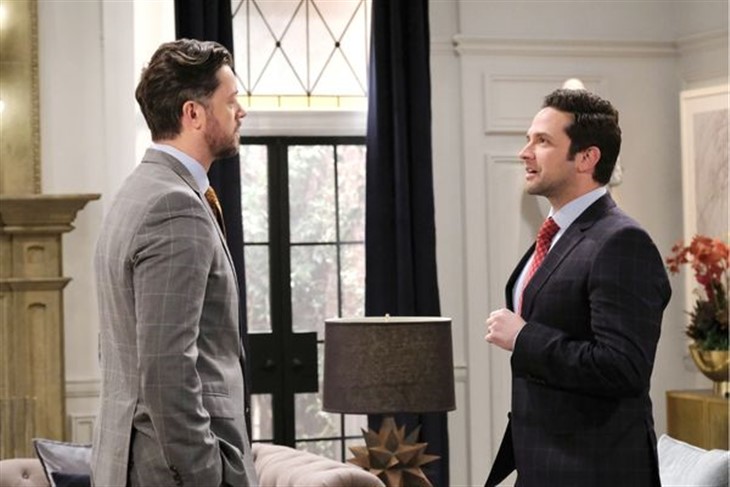 Days of Our Lives (DOOL) spoilers for Friday, September 16, 2022, reveal EJ and Stefan getting ready to team up.

EJ DiMera (Daniel Feuerriegel) could barely believe his ears when Gabi Hernandez (Camila Banus) told him that Stefan O. DiMera (Brandon Barash) is actually alive and it wasn’t Jake DiMera (also Brandon Barash) who Ava Vitali (Tamara Braun) thinks she saw. This changes the whole calculus for him when it comes to DiMera Enterprises.

When Stefan and EJ finally meet, it turns out they like one another and think they can form quite a ruthless partnership. Stefano DiMera (Joseph Mascolo) would be so proud. However, we are sure Li Shin (Remington Hoffman) will not be happy at all. Brother Chad DiMera (Billy Flynn) likely doesn’t even care at this point and brother Tony DiMera (Thaao Penghlis) will find things to be amusing.

If EJ could barely believe his ears, Chloe Lane (Nadia Bjorlin) can barely believe her eyes. Before Stefan makes his way back to the DiMera mansion, he has to shock Chloe in her hotel room. Of course, she will believe this is Jake DiMera at first but will quickly realize this is Stefan, a man she had a brief romance with that never went anywhere.

How will Chloe react to this strange discovery that Stefan is alive? Even more important, how will she react to learning he is somehow convinced he is in love with her, as if his marriage to Gabi never happened?

Days Of Our Lives Spoilers – Things Get Ugly For Bristen

Kristen DiMera (Stacy Haiduk) surely hopes Chloe will react well to seeing Stefan. After all, she thinks this is her key to getting Brady Black (Eric Martsolf) back, but if that doesn’t work, she will at least get Rachel Black. That is exactly what Kristen aims for with her line o of questioning at the custody battle where she brings up some things from Brady’s past that will not make him look like a saint.

Will she bring up his past drug and alcohol use? Is it any worse than any of the insane things that Kristen has done for decades on end now, even when she used to babysit Brady? Stream Days of Our Lives weekdays on Peacock by 6 am EST each morning.

Y&R Spoilers: Will Nick And Sally Face The Consequences?