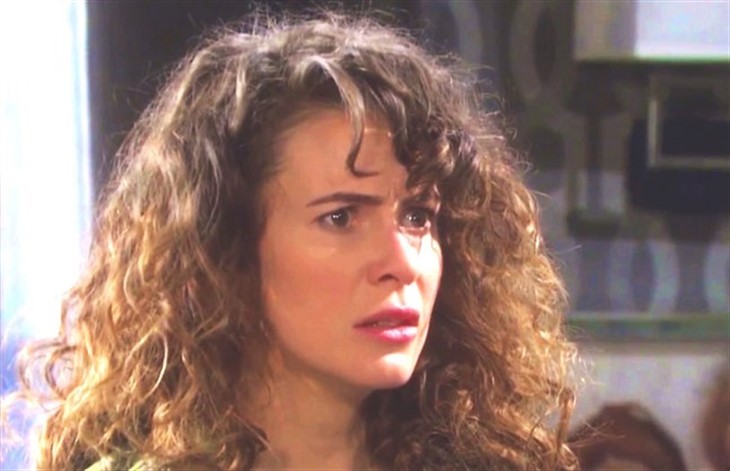 Days of Our Lives spoilers reveal that Sarah Horton (Linsey Godfrey) returns to Salem. However, Sarah believes that she is Tony DiMera’s (Thaao Penghlis) former lover, Renee Dumonde. When “Renee” comes back to town, it could put Anna DiMera (Leann Hunley) in grave danger. “Renee” tried to kill Anna before and she might do it again.

Days Of Our Lives Spoilers – Shocking And Disturbing Discovery

DOOL spoilers reveal that Abigail DiMera (Marci Miller) discovers that Kristen DiMera (Stacy Haiduk) has been holding Sarah hostage for nearly a year. However, Kristen justifies her actions and claims she’s been taking care of Sarah, who is not well.

Separately, Steve “Patch” Johnson (Stephen Nichols) and Kayla Johnson (Mary Beth Evans) run into Sarah. The interaction is described as bizarre because Sarah doesn’t seem to know who she is or that she’s Kristen’s captive.

Meanwhile, Tony gives Chad DiMera (Billy Flynn) a clue that Abigail could be on a deserted island. As Kristen loses control of the situation on the island, Tony and Chad are on their way.

Some newer viewers might not know who Renee is, so here is a quick summary. Renee and Tony were in love many years ago. Tony proposed and Renee happily accepted. Then, Renee read in her mother’s diary that her father was Stefano DiMera (formerly Joseph Mascola). Thinking that she and Tony were half-siblings, Renee broke off the relationship and got involved with David Banning (last played by Gregg Marx).

Days of Our Lives spoilers reveal that Tony ran a blood test and discovered there was no blood relation between him and Renee. Even though Tony told her this, she decided to stay with David.

However, Renee would end up getting extremely jealous of Tony’s relationship with Anna. At one point, Renee tried to have Anna murdered. Even though both Tony and Anna nearly lost their lives when the boat exploded, the couple survived. If Sarah thinks that she is Renee and is in love with Tony, then that certainly makes Anna a target.

It is teased that Tony and Anna will face a big problem after Sarah’s rescue. The couple has different ideas on how to deal with the situation. This situation might be Sarah aka “Renee” wanting Tony. If Renee decides that Anna must be eliminated, how will Tony save the woman he loves?

Tony can’t kill Sarah as she is just Kristen’s innocent victim. At the same time, he has to do whatever he can to protect Anna. Just how bad will this get and could there be a fatality by the time the story is over?