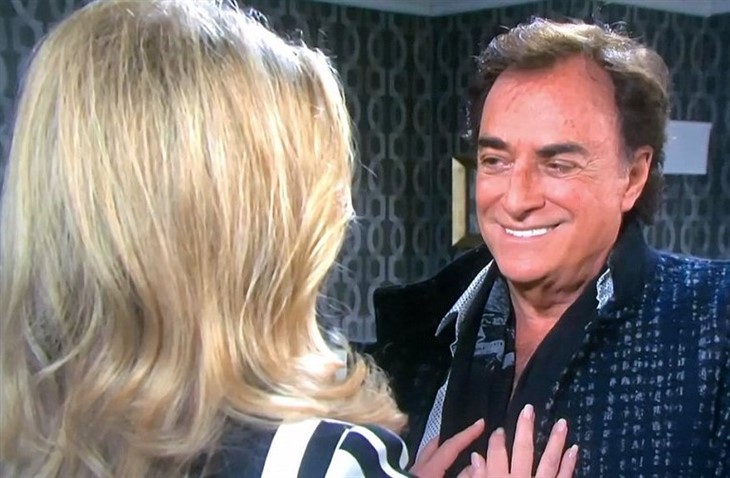 Days of Our Lives spoilers reveal that Anna DiMera (Leann Hunley) makes a deal with TR Coates (William Christian). It has to do with Johnny DiMera’s (Carson Boatman) movie. Anna wants to take Abigail DiMera’s (Marci Miller) place as Marlena Evans (Deidre Hall) in the film. However, Tony DiMera (Thaao Penghlis) is horrified by Anna’s poor taste and bad timing.

Days Of Our Lives Spoilers – Searching For Abigail DiMera

DOOL spoilers reveal that Chad DiMera (Billy Flynn) searches for what could have happened to Abigail. The text that he received saying she was in Boston with her parents isn’t true. So, Jack Deveraux (Matthew Ashford) will arrive in Salem and grill Gwen Rizczech (Emily O’Brien) about Abigail’s whereabouts.

Meanwhile, Tony provides Chad with a lead and the two will head to an island. However, is it the same island where Kristen DiMera (Stacy Haiduk) is holding Abigail, Sarah Horton (Linsey Godfrey), Steve “Patch” Johnson (Stephen Nichols), and Kayla Johnson (Mary Beth Evans)?

Days Of Our Lives Spoilers – Striking Deal With TR Coates

Days of Our Lives spoilers reveal that Anna’s suggestion might be that the show must go on. It is hinted that Anna could get bit by the fame bug. Is it possible that Anna’s deal with TR might have to do with her taking Abigail’s place in the movie as Marlena? With Johnny still being possessed by the devil, it certainly is possible.

Anna can be quite convincing and does look more like Marlena than Abigail does. TR will probably be convinced as his goal is to make money. With Abigail missing, the project will be put on hold or they would have to find someone else for the role. Anna will probably reason that her playing Marlena is a quick fix, especially since she already knows the script.

It is teased that Anna’s deal with TR could cause a problem with Tony. Tony was on board with the movie in the beginning. However, it’s different now that Marlena was possessed again.

Tony and Marlena used to be really close friends. That friendship hasn’t been featured lately, but they also didn’t have a fallout. So, it might come into play when Anna makes this bad deal with TR. Since the devil is all about ruining relationships right now, could “JoDevil” use the movie to tear apart Tony and Anna?