Days Of Our Lives Spoilers: Marlena Fears For Baby’s Safety, Will She Treat Evan? 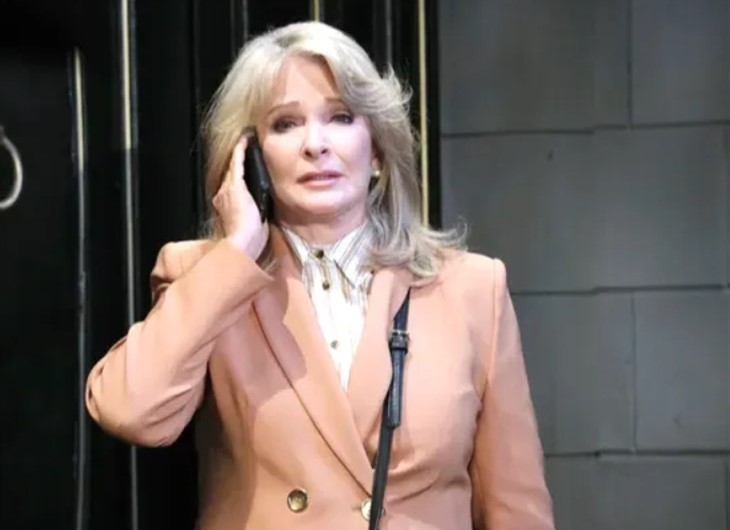 Days of Our Lives spoilers tease that Dr. Marlena Evans (Deidre Hall) has had great success in treating the criminally insane. Ben Weston (Robert Scott Wilson) was known as the “Necktie Killer” after murdering several people. But after being captured by authorities and committed to an institution, Marlena took over Ben’s care, and eventually with the right combination of medication and therapy, Ben was able to return to society and sanity. Marlena also agreed, after much coercing, to treat Jan Spears (Heather Lindell), another murderer with mental issues. Although Marlena had a personal stake in both of those cases, she agreed to take both cases.

Criminal mastermind Orpheus (George DelHoyo) recently blackmailed the Governor in order to obtain a pardon for himself and his son Evan Frears (Brock Kelly) as well as several others. Evan conceived a baby with Jan and is adamant about taking custody and caring for his newborn son. But Evan has a murderous history as well so Orpheus asked Marlena to treat Evan the way she treated Ben. Marlena initially declined, but now that Evan has custody of his baby, Marlena might soon change her mind.

DOOL Spoilers – Could Evan Frears Be A Threat To His Son?

Marlena initially declined Orpheus’ request although she promised to recommend a different therapist. But now that Evan has custody of his son, Marlena may soon rethink her position. Marlena was a mother figure to Evan when Evan was a child, so she might have the best chance of getting through to Evan. And now that Evan has custody, Marlena might worry about the baby’s safety and agree to take Evan’s case. But at the moment, Evan doesn’t even believe he needs custody.

Days Of Our Lives Spoilers – Can Evan Frears Be Healed?

If Evan hopes to become a productive member of society, Marlena might be his best hope. Her previous success with Ben indicates that Marlena may be the best person to treat Evan, despite her initial hesitation. Add to that the safety of Evan’s baby and Marlena may feel she has no choice but to try to help Evan. But first, Evan needs to be convinced that he needs help. He needs to face the fact that he murdered Jordan Ridgeway (Chrishell Straus) and Marlena might be the only person who can do that.

Should Marlena treat Evan? Does Orpheus have ulterior motives? Will Evan even agree to therapy? Anything can happen in Salem so stay tuned to Days of Our Lives airing weekdays on NBC. And don’t forget to check back right here regularly for all your Days of Our Lives news, information, and spoilers!