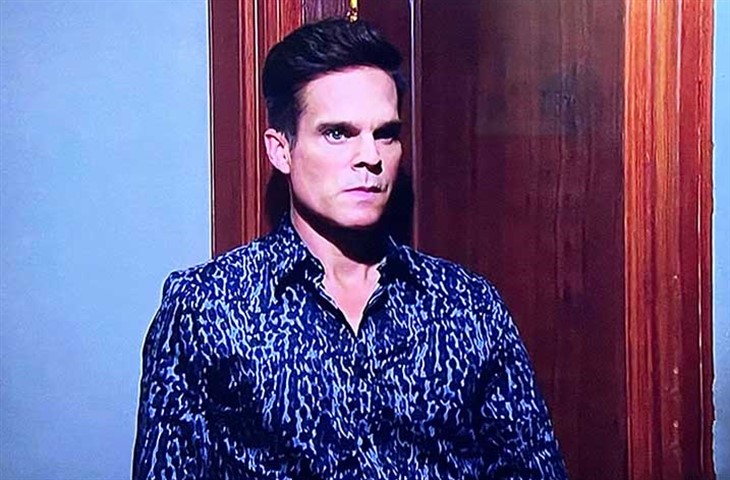 Viewers saw Leo go to Abigail’s room prepared with a steak knife hidden in a duffel bag after Gwen Rizchech (Emily O’Brien) told him to stab her in the heart! Gwen had been livid and hurt after Abigail broke the ceramic cup she’d made for their father Jack Deveraux’s (Matthew Ashford) birthday and refused to deliver it! Leo looked through the open door of Abigail’s room and watched her work on her computer, but whether he’d get the nerve to kill her remained to be seen!

Later, he was seen outside the DiMera mansion sweaty and scared, as if he either had done – or saw – something horrible take place! Later, it was revealed he broke into Abigail’s jewelry box and stole her jewelry and a wad of cash.

DOOL Spoilers – Leo Stark Had No Blood On Him

Viewers will note that Leo had no blood on him as he sat on a bench frightened and sweaty; it appeared he was in a cold sweat! But, if Leo had stabbed Abigail in the heart as Gwen had told him to, he would have had some blood on him! He later went to the prison to see Gwen and to accuse her of murdering her sister – she did appear to have been gone during the time. She denied to Leo that she had murdered her, and Leo denied that he had; she claimed to a guard that she’d fallen asleep in a corner of the prison library! She too, had no blood on her when she returned to her cell.

Leo obviously saw what happened to Abigail, but his fright seemed to indicate he didn’t kill her – perhaps he was afraid he’d be killed too! He did however appear to return to the room when it was safe, breaking into her jewelry box and stealing jewels and cash. He remarked he’d have rather it was the Alamanian Peacock but the beads and other jewelry would have to do!

Leo hid the bag in the bushes and came back for it later when he was calmed down and together. But the jewelry and cash are his getaway funds from Salem; he saw the murder but he’ll never tell, and besides, he’s good for the robbery if not the murder!

DOOL Spoilers – Leo Stark Rushes To Get Out Of Town

Leo will rush to get out of town before the police can find him and question him. He knows that he didn’t kill Abigail, but he did steal the jewelry and cash, and besides, eventually Thomas DiMera (Cary Christopher) may recognize him! Leo told him he was the tooth fairy and never to tell on him or he wouldn’t get any more payments for lost teeth! However, he realizes when Thomas finds out his mommy isn’t coming back he might talk about the tooth fairy in the tunnels! Leo knows who did it but he’ll never tell!