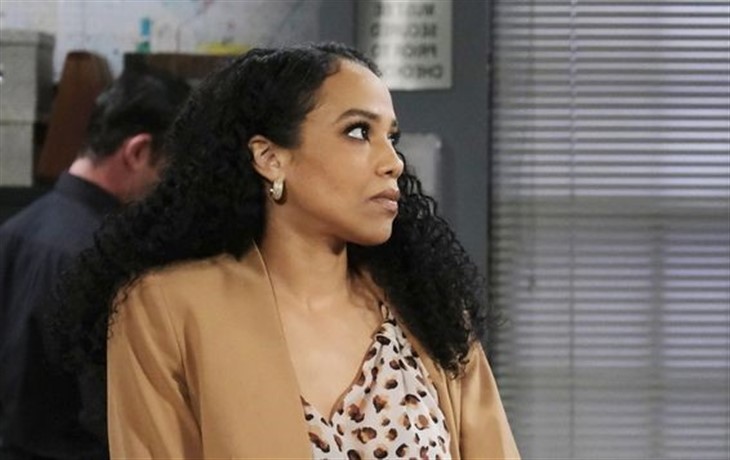 Days of Our Lives spoilers reveal that Jada Hunter (Elia Cantu) learned about Nicole Walker (Arianne Zucker). After getting some details about Nicole from Eric Brady (Greg Vaughan), Jada asked him out on a date. During the week of August 8, Jada notices a jealous Nicole watching them. So, Jada rubs it in Nicole’s face by taking Eric upstairs right in front of his ex.

DOOL spoilers reveal that after Nicole was saved from a violent mugging, Eric took her to the hospital. Rafe Hernandez (Galen Gering) needed to stay on duty to catch the robber. Jada, being new in Salem, had some questions.

Rafe tried to explain that Eric and Nicole used to be married. When Jada balked at Eric taking Nicole to the hospital instead of Rafe, the commission tried to explain things. However, Rafe couldn’t get into too much detail because they had a criminal to catch.

In a more recent episode, Jada threw a temper tantrum at work after dealing with Xander Cook (Paul Telfer). That is when Jada had a scene with Eric, who assured the detective he couldn’t stand Xander either.

The topic quickly went to Eric saving Nicole from the robber. Jada clearly saw there was a connection between “Ericole.” This is why she questioned Rafe about Eric taking Nicole to the hospital.

Eric confessed to still having feelings for Nicole to Jada. Despite this confession, Jada still asked Eric out on a date. One would think that Eric having feelings for another woman would make Jada not to risk getting hurt. Instead, it didn’t seem to bother her. Perhaps that’s because Jada already has serious issues with Nicole.

Days of Our Lives spoilers for the week of August 8 reveal that Jada and Eric will enjoy their date. However, Nicole just happens to walk in and see them together. Nicole is jealous but also wants Eric to be happy.

With that being said, Jada sees Nicole spying on them. Jada can sense the jealousy oozing from Nicole, per Cantu’s interview with Soap Opera Digest. This doesn’t make Jada back off or even try to act like a decent person. Jada intentionally sets Nicole off by orchestrating her next move.

With Nicole watching and already jealous, Jada commits a mean girl move. Jada decides to rub Nicole’s nose in her date with Eric. Jada takes Eric upstairs, which gives Nicole the assumption that they are hopping into bed together.

While Jada is doing nothing wrong by dating Eric, intentionally setting someone off is pretty tacky. It shows what kind of character she is already and makes one wonder what other problems she will instigate.