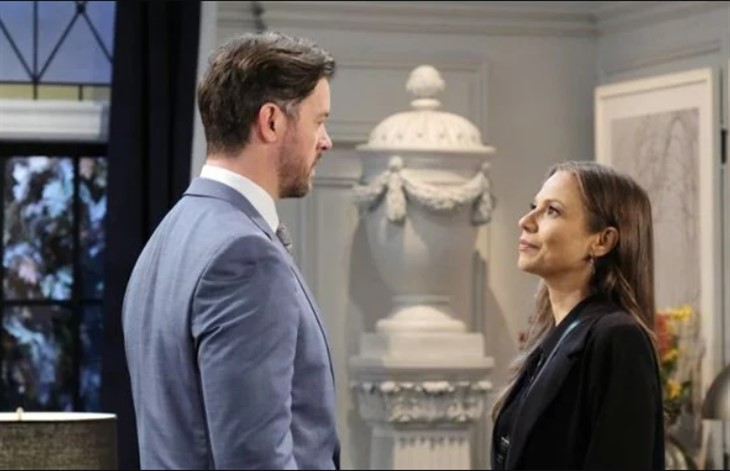 Days of Our Lives spoilers indicate that Ava Vitali (Tamara Braun) will regain the upper hand with E.J. Dimera (Dan Feuerriegel). Now that Steve Johnson (Stephen Nichols) knows that Tripp Johnson (Lucas Adams) is missing, Ava could be able to get control of this situation once again.

Days Of Our Lives Spoilers – Steve Johnson Is On The Case

Days Of Our Lives spoilers reveal that Steve is on the case and ready to rescue his son. Steve then plans to go after E.J. and make him pay. Ava refused to tell Steve the whole story, which means he has no idea that Susan Banks (Stacy Haiduk) has been kidnapped. This has the potential to cause a huge blowup between Steve and E.J.

Kayla Johnson (Mary Beth Evans) will be in the middle as well as she teams up with Steve to save their son. Kayla may be Tripp’s stepmother but she loves him like her own. Ava has been doing so well but it is obvious that she caused this issue. Can Steve and Kayla save Tripp before he ends up in the hands of Orpheus (George DelHoyo) or some of his associates?

E.J. has taken Ava’s job, her money, her home, and her dignity. Now Ava wants back what she feels she is owed. Ava’s cousin Angelo Vitali (Angelo Tiffe) has made it clear that there was no place for Ava in the family business. Ava plans to use this money to survive since she has lost everything else. Will Ava get her money before Susan manages to escape?

Xander Cook (Paul Telfer) is beginning to have second thoughts about this kidnapping. Now Xander has two hostages instead of one. Bonnie Kiriakis (Judi Evans) is aware that Xander knows who she is as well. Xander is about to be busted by Bonnie and may be seen moving them on the Kiriakis grounds. Will Xander get caught before Ava gets paid?

It seems that Ava will manage to dupe E.J. and possibly get the money that she has requested from him. However, Ava may also put Susan in the car with her and speed off with E.J. chasing her. Spoilers indicate that someone close to them will be the one hurt by this car chase. Will Susan or Tripp end up injured or even dead?

Ava’s car seems to go off the road and ends up exploding. Will Ava fake her death or could she have Susan in that car and Susan be killed in the explosion? Who will survive?