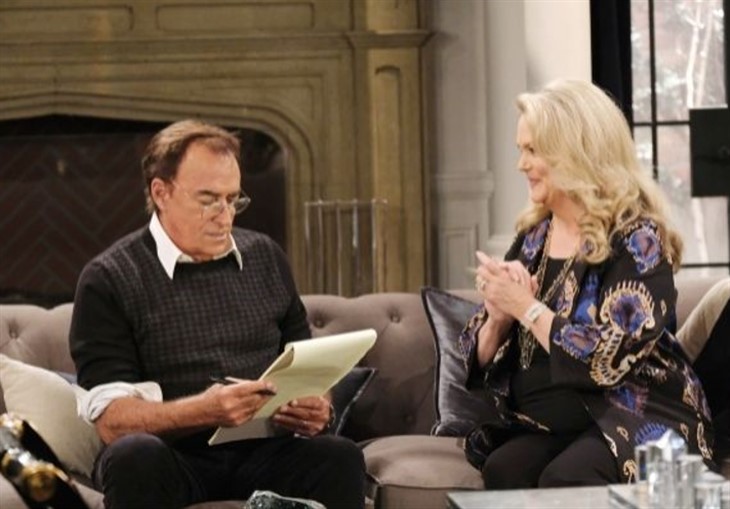 Days of Our Lives spoilers and rumors tease that Tony DiMera (Thaao Penghls) may not really be Tony, considering that Andre DiMera (Thaao Penghlis) recently appeared in the DiMera crypt; Tony isn’t acting very Tony-like these days, especially in how he’s been treating Anna DiMera (Leann Hunley); could Andre be impersonating Tony again?

Tony has treated Anna rather unkindly as of late, although Days of Our Lives viewers can understand why he’s be offended at her attitude towards Sarah Horton (Linsey Godfrey). No one could blame Anna for being upset when Sarah thought she was Renee DuMonde (Philece Sampler) considering all the things that the real Renee put Anna through, which longtime Days of Our Lives viewers would remember.

Renee tried to drown Anna in a boat, for instance, and caused her to miscarry her and Tony’s child; those are a lot of traumatic memories to deal with. But when Anna was in the interrogation room at the Salem PD, Tony was pretty brusque with her – but then Anna didn’t seem to care that Sarah now thought she was five, either! Days of Our Lives viewers have noted that something about the way Tony talked to her seemed – well, off, when he told her there wasn’t a bright future for her!

DOOL Spoilers – No Bail, No Helping Anna DiMera With A Defense Attorney?

The very least the real Tony would have done would be to arrange for her bail and pay for it, and then work on getting her a defense attorney – although viewers will admit, Anna’s actions were egregious. A case could be made for Tony wanting Anna to learn her lesson and dial down her hateful attitude, because indeed, she had no business injecting “Renee” with that syringe – which made things even worse, and more difficult.

Days Of Our Lives Spoilers – Could A Swap Have Been Made On That Island-Did Kristen DiMera Have Andre DiMera All Along?

There was some confusion on whether it would be Anthony, known as Tony, or Andre that Kristen DiMera (Stacy Haiduk) brought back from the warehouse in Nashville. But could someone else have been on that island that Kristen held Sarah on – possibly Andre, and a swap have been made unbeknownst to anyone? Tony hasn’t acted like himself since they came back from the island, and Kristen never has been found!

Days of Our Lives viewers will remember that in the DiMera crypt, Andre showed up to threaten Johnny DiMera (Carson Boatman) and then disappeared behind what could have been a door back in the darkness. Andre claimed to be a messenger from the devil, but then, Andre always has acted like a messenger from the devil! Poor Tony might be back on that island where he was stranded for years while Andre impersonated him the last time!