Days Of Our Lives Spoilers: Gabi Knocks Stefan Out, Plans To Reverse Brainwashing, Does It Work? 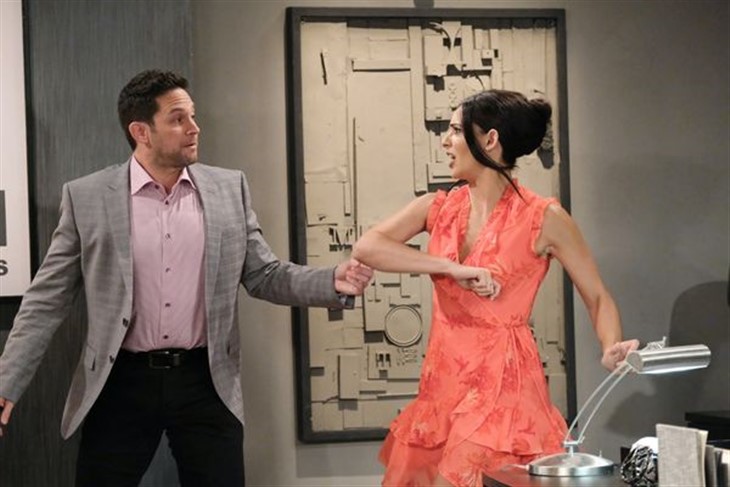 Days of Our Lives spoilers indicate that Gabi Hernandez (Camila Banus) will knock out Stefan Dimera (Brandon Barash) according to the Winter promo. Why would Gabi want Stefan unconscious? Does Gabi believe that a whack on the head could reverse Stefan’s brainwashing?

Days Of Our Lives spoilers reveal that Gabi is still very much in love with Stefan. Stefan obviously is annoyed by the fact that he is still attracted to Gabi. However, Gabi may very well remember Dr. Rolf (Richard Wharton) admitting to brainwashing Stefan on Li Shin’s (Remington Hoffman) orders. Does Gabi believe that a whack over the head would bring all of that back?

Of course, Gabi could have other ideas in mind. Stefan could have simply said something to make Gabi mad enough to hit him. Then again, Gabi has never got that annoyed with him before. Gabi does want her husband back though and away from Chloe Lane (Nadia Bjorlin). Does Gabi believe she can spend enough time alone with Stefan to bring his memory back?

DOOL Spoilers – Gabi Hernandez Believes That Dr. Rolf Did Nothing

Dr. Rolf brainwashed Gabi to believe that nothing was done to Stefan. Gabi is supposed to be getting married to Li. Li’s sister Wendy Shin (Victoria Grace) knows that Rolf brainwashed Stefan and is working with Johnny Dimera (Carson Boatman) to prove it. If Wendy and Johnny escape Dr. Rolf, they could tell Gabi the truth.

Will Rolf undo his brainwashing? Unfortunately, Rolf wasn’t sure that his brainwashing could work in the first place. Can Rolf be sure he can undo the damage he has already done? What if something goes wrong and Stefan ends up with some sort of brain damage from a second attack on his brain? Rolf is no expert at this time or treatment and could do more harm than good. Is there another way to help?

Days of Our Lives Spoilers – Marlena Evans To The Rescue?

Marlena Evans (Deidre Hall) has been the only person who has constantly managed to break through Rolf’s brainwashing. However, most of the people she has helped have been brought back to life by Rolf, not just brainwashed by him. Marlena may be able to help Gabi to realize the truth of Rolf’s confession to her but can Marlena help Stefan?

Another issue with Marlena could be that Stefan doesn’t want to be helped. Stefan doesn’t believe anything is wrong. Of course, Stefan originally thought something was wrong, will he let Marlena try to help?

GH Spoilers: Sonny’s Got Carly On His Mind — And Nina is Furious