Days Of Our Lives Spoilers: Li’s Instructions For Rolf, Brainwash Johnny And Wendy? 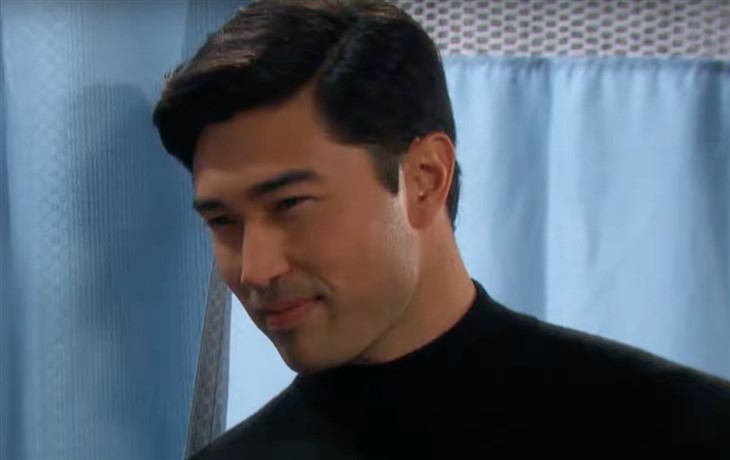 Days of Our Lives spoilers and updates tease that Li Shin (Remington Hoffman) will give some instructions to Dr. Wilhelm Rolf (Richard Wharton) to handle an unexpected situation. Now that Rolf has disabled Johnny DiMera (Carson Boatman) and Wendy Shin (Victoria Grace) with a shot, Li tells Rolf to brainwash them.

Days Of Our Lives Spoilers – Forget-Me-Shots

Rolf likely injected Johnny and Wendy with the same forget-me-shots that he injected Gabi Hernandez (Camila Banus) with when she showed up to confront him. The serum acted like a date rape drug, where a span of time would be forgotten, say twenty-four hours previous to the injection. Apparently Li doesn’t trust how much Wendy and Johnny have actually found out about his brainwashing scheme regarding Stefan DiMera (Brandon Barash) so he wants to ensure they remember nothing.

They obviously haven’t found out that Kristen DiMera (Stacy Haiduk) is in on the scheme as well, more than Li is. She wants to keep Brady Black (Eric Martsolf) and he wants to keep Gabi, and if Stefan hadn’t been brainwashed Stefan may have wanted Gabi back.

DOOL Spoilers – Brainwash Them, Send Them On A Plane Home

Li sets up for Wendy and Johnny to be put on a plane home after Rolf brainwashes them so they don’t remember anything that happened back to when Wendy  showed up. That should be far enough back for anything either of them might have found out to be erased from their memories.

Keeping the plan for Li to marry Gabi and Stefan to stay with Chloe Lane (Nadia Bjorlin) is imperative to the success of the plans Li and Kristen have. If the secrets are blown wide open by Johnny and Wendy then everything has been for naught, and Li and Gabi could both lose their jobs at DiMera besides. Li already had to blackmail EJ DiMera (Dan Feurreriegel) with something he had on him to be able to keep his job.

Days Of Our Lives Spoilers – Back To Alaska For Wendy Shin

On second thought, Li decides to send Wendy back to Alaska and her old job there – she’s making way too much trouble at corporate. Perhaps Johnny should be flown back to Italy, Sami Brady (Allison Sweeney) can take care of her own spawn, after all. But one thing is for certain – they will not foil Li and Kristen’s plans by exposing them.

Li tells Rolf to make the brainwashing quick, painless, and long lasting, in other words, it has to stick. Li will not lose all he’s gained and Kristen certainly won’t because the children don’t like what the parents and older siblings are doing.

GH Spoilers: Curtis Isn’t an Ashford, And His Mother’s Lie Is Too Close For Portia’s Comfort