Days Of Our Lives Spoilers: Eli’s Condition Takes A Turn For The Worse, Horrifying Lani And Valerie! 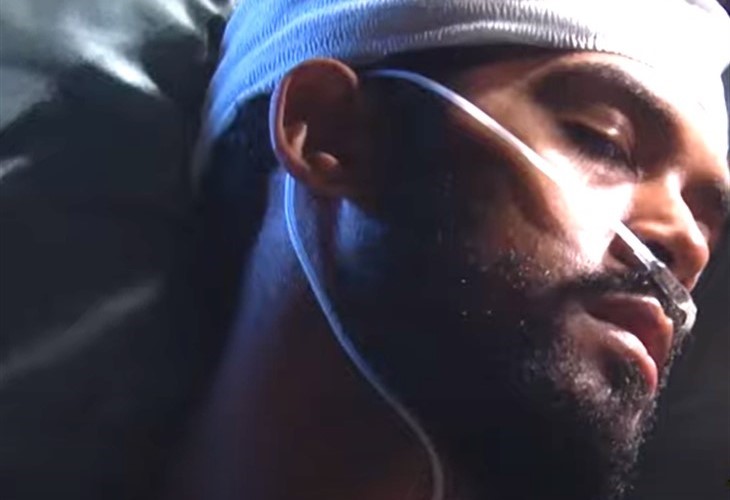 Days of Our Lives spoilers and updates tease that after Eli Grant (Lamon Archey) is rushed to Salem University Hospital for treatment after being shot in the head by TR Coates (William Christian) he’ll take a turn for the worse! Days of Our Lives viewers know that will horrify his wife Lani Grant (Sal Stowers) and his mother Valerie Grant (Vanessa A. Williams)!

Days of Our Lives viewers will see that Eli is barely clinging to life when he is found by Lani and Shawn Brady (Brandon Beemer) who will be responding to a call of gunfire in the park. Lani, of course, will have no idea that it is her husband who has been shot, and it looks like he may have taken a bullet to the brain; she will give him CPR as Shawn calls 911 but Eli will barely hang on! Days of Our Lives viewers know this is serious enough for his mother to travel to Salem and both she and Lani will be fearful for Eli’s life; undoubtedly Shawn will continue to investigate the shooting. Coates staged it so it would appear that his drug dealer, Frank (Michael Varde) shot Eli and then overdosed by shooting up heroin, which he had just bought from him when Eli showed up! To add insult to injury, Coates will continue his cover-up by showing up at Salem University Hospital to say prayers for Eli’s survival!

DOOL Spoilers – Julie Williams, Abe Carver And Paulina Price Will Be There For Support

As Days of Our Lives viewers can imagine, many will come to Salem University Hospital to lend support for Eli as he is rushed into surgery and brought into his room, which obviously must be in an intensive care unit! Julie Williams (Susan Seaforth Hayes) is shocked and will shortly be in tears as it looks like from the Days of Our Lives weekly preview video, it may be Shawn who gives her the terrible news. There is a scene of Abe Carver (James Reynolds) and Valerie giving group hugs to Lani, and Paulina Price (Jackée Harry) will hold Lani as she cries on her shoulder – Eli’s life definitely remains in jeopardy. Brain surgery to remove a bullet, especially at such close range, may only be a bandaid – if the bullet indeed did enter his brain, because it could have caused massive damage. There is always the slightest of chances that it grazed his brain as Coates and he struggled over the gun, but Eli is shown with a bandage around his head.

Days Of Our Lives Spoilers – Lani And Valerie Grant Are Horrified As Eli Grant Takes A Turn For The Worse!

Days of Our Lives viewers will see Lani and Valerie, by Eli’s bedside, horrified as Eli takes a turn for the worse; he will begin to suffer seizures that shake his whole body! Longtime Days of Our Lives viewers will recall that Valerie is a doctor – but even though she is a cardiologist by specialty, she knows that the violent seizures mean bad news for Eli! Many times it indicates swelling of the brain, which would not be surprising after a shot to the head even if the bullet didn’t enter his brain; even if it only grazed his brain it could cause enough damage to make it swell. Surgeons may have to drill a hole in his skull to relieve the pressure, and even if Eli does survive, he could be left with a permanent traumatic brain injury!