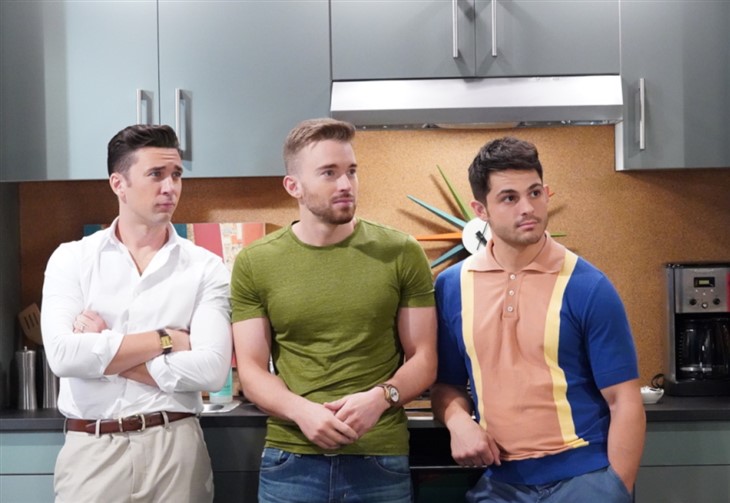 Days of Our Lives spoilers reveal that Craig Wesley (Kevin Spirtas) refuses to listen to reason. Will Horton (Chandler Massey) and Sonny Kiriakis (Zach Tinker) will turn to Chad DiMera (Billy Flynn) for help. Even though some fans might not understand Chad seducing Leo Stark (Greg Rikaart), it makes perfect sense to those who watched the DOOL spinoff.

DOOL spoilers reveal that Chloe Lane (Nadia Bjorlin) is desperate to save her father from Leo. Brady Black (Eric Martsolf) will do what he can to help Chloe as she is distraught about the relationship. Nancy Wesley (Patrika Darbo) is also stressed out about it as she doesn’t want Craig to be taken advantage of by Leo.

Will and Sonny already tried to reason with Craig. However, Craig is determined to believe that Leo’s changed. So, just as Craig refused to heed Brady and Chloe’s warnings, “WilSon” was also unsuccessful.

It is teased that Will and Sonny will turn to Chad for help. There are reports that Chad will try to seduce Leo. Of course, fans know that Chad is happily married to Abigail DiMera (Marci Miller). Chad has no interest in anyone else romantically, including Leo.

Days of Our Lives spoilers reveal that Chad won’t actually have to sleep with Leo. All he will need to do is get Leo into bed just as Craig walks in the door. In Will and Sonny’s minds, this could be enough to get Craig to break up with Leo.

However, timing will be everything if Chad agrees. Now, some fans might think this is an outrageous idea that couldn’t possibly work. Those that watched “Beyond Salem” on Peacock understand why Will and Sonny might think this will work.

DOOL Spoilers – Why It Could Work

For those that didn’t get the chance to watch “Beyond Salem,” Leo had Chad convinced that they slept together. Of course, Chad and Leo didn’t do anything. However, for a while, Leo had Chad completely convinced that they slept together and he just didn’t remember. Chad was in quite the state over the situation until he realized it was just a mind game.

Will and Sonny were present in that storyline. So, Will and Sonny might remind Chad of what Leo did and it could be the perfect way for him to get revenge while protecting Craig at the same time. However, will Leo fall for it? We will have to keep watching the NBC soap to find out!