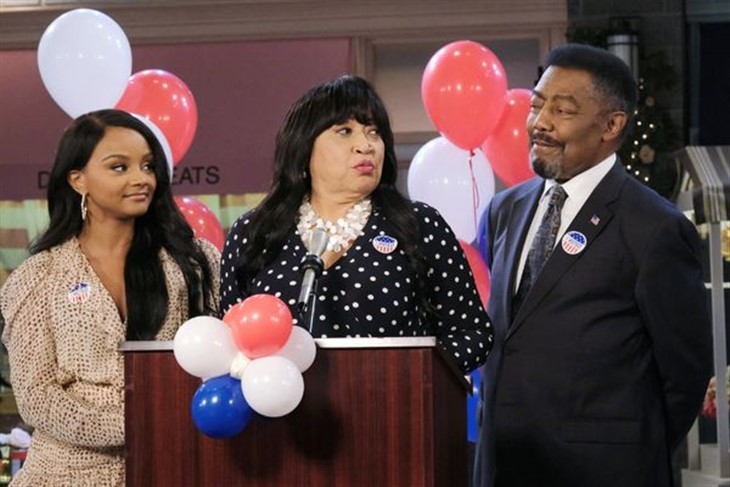 Days of Our Lives spoilers for Tuesday, November 8, 2022, reveal the results of the Salem election and the state election, despite not knowing what state Salem is in.

Days Of Our Lives Spoilers – Salem Is On Pins and Needles

Like the rest of the divided country waiting to see if it falls into authoritarian hands, the citizens of Salem are on pins and needles waiting to see who their next governor will be. Will it make a difference about whether women will still have the right to choose?

Well, it looks like Paulina Price Carver (Jackee Harry) won despite entering the race quite late and having no experience in government whatsoever. That’s just what Americans want, right? An outsider who has no clue what they are doing to shake things up.

Well, this governorship might not last long. While Abe Carver (James Reynolds) is once again mayor but steps down immediately, trouble is brewing for Paulina in the form of a November surprise. And all Abe really wanted to do was move to the capital and be there for his new wife.

Sloan Petersen (Jessica Serfaty) still can’t believe what Alex Kiriakis (Robert Scott Wilson) took from her and she is determined to win at this game. That’s why it looks like she goes to the police with what she knows about Chanel Dupree (Raven Bowens). Paulina, Alex, and Stephanie Johnson (Abigail Klein) tried to pull one over on her and she is not going to take this lying down — or blindfolded and handcuffed to a bed.

While Sloan does some dirty work, Chad DiMera (Billy Flynn) explains some of his feelings to Stephanie, who is all ready to go on a date with Alex.

But what is this about Shawn Brady (Brandon Beemer) having to arrest someone? Is it Chanel? Did what she do warrant an arrest? And what does Julie Williams (Susan Seaforth Hayes) have to do with all this as that is someone that Shawn is also going to have to reprimand?

Something crazy is going on in Salem and it doesn’t look good for anyone once this election is officially over. Stream Days of Our Lives weekdays on Peacock by 6 am EST to see how these stories play out.

The Young and the Restless Spoilers: Devon Makes A Shocking Move