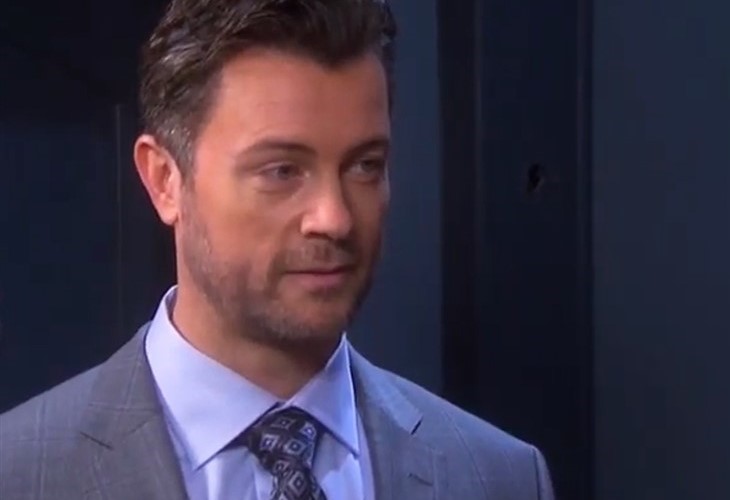 Days of Our Lives (DOOL) spoilers reveal that Chad DiMera (Billy Flynn) told Kate Roberts (Lauren Koslow) he had to tell the truth in court. However, when Chad spots EJ DiMera (Dan Feuerriegel) and Abigail DiMera (Marci Miller) sharing a “moment,” he could have a change of heart. Has Chad just played right into the devil’s hands and what is EJ’s fate?

DOOL spoilers reveal that Kate has her hands full with two of her children. Right after trying to do damage control for Philip Kiriakis (Jay Kenneth Johnson), Kate found out about Lucas Horton’s (Bryan Dattilo) mess. Kate knows that EJ is innocent of kidnapping Sami DiMera (Alison Sweeney). At the same time, she’s trying to find a way to help protect Lucas.

Kate felt that EJ had to go down in order to save Lucas from prison. It was also a bit of revenge on her part for what EJ did to her. So, she was on board with Chad lying on the stand. Then, everything changed when Chad decided he was going to tell the truth.

Before Chad goes on the stand, he makes an infuriating observation. Chad “catches” EJ and Abigail sharing a “moment.” However, it is likely not what Chad thinks. Abigail is probably talking to EJ about the missing DiMera pilot that could lead her to finding Sarah Horton (Linsey Godfrey).

Abigail might also be trying to navigate the situation between EJ and Chad. There is also the possibility that Abigail wants a quote from EJ. Remember, Abigail mentioned having to cover the trial for The Spectator since the assigned reporter was out sick.

Days Of Our Lives Spoilers – Chad DiMera Lies Under Oath

Days of Our Lives spoilers reveal that Chad already has issues with EJ and Abigail. Many years ago, they had an affair. Plus, with Johnny DiMera aka “JoDevil” (Carson Boatman) getting the shares signed over to him, this complicates the whole issue.

It might not have even been Abigail that was speaking with Chad. Remember, the devil can make people see something that isn’t there. The devil can also change people’s appearances, as he did with Jan Spears (Heather Lindell) and Belle Brady (Martha Madison). So, Chad could lie under oath after all.

Even if EJ is somehow found innocent, the devil still might be ahead in the battle. “JoDevil” seems to admire Stefano DiMera (formerly Joseph Mascolo). So, “Johnny” is going to begin to channel his inner Stefano.

Johnny will use Gabi Hernandez’s (Camila Banus) greed next. When Johnny flirts with Gabi, she tries to use it to get the shares of DiMera Enterprises. However, the flirtation goes too far and they “heat up.” That suggests Johnny and Gabi sleep together, which leaves Jake DiMera (Brandon Barash) betrayed in more ways than one.

It sounds like EJ’s problems will multiply. Lucas and Chad might not be the real enemies… it’s “JoDevil.” However, how far will the devil go and how much will EJ have to pay before the truth comes out?