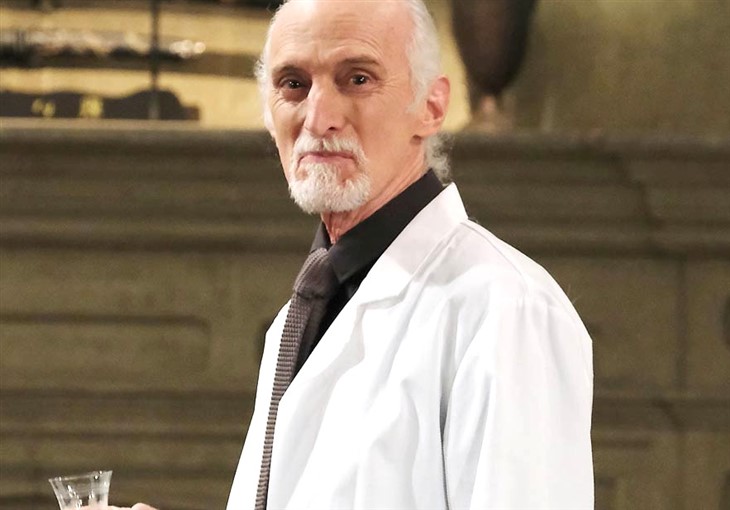 Days of Our Lives spoilers tease that Dr. Wilhelm Rolf (Richard Wharton) has a surprise connection to Li Shin (Remington Hoffman)! As viewers know, both men are closely affiliated with the DiMera family, Rolof has been the family doctor for many years while Li is filling for his father Wei Shin (last played by Michael Hagiwari) as the Chairman of the Board at DiMera Enterprises for a little more than two years now. There hasn’t been much explanation given for Wei’s extended absence.

Days Of Our Lives Spoilers – Li Shin Has Been Watching Over Rolf’s Lab!

Days of Our Lives viewers will soon discover that Li and Dr. Rolf seems to have some sort of business arrangement in place. Rolf has been in prison for quite a while now so it became Li’s responsibility to keep an eye on Rolf’s lab, where Rolf has been keeping Stefan O DiMera’s (Brandon Barash) body on life support until Rolf could locate a suitable transplant heart for him. But why would Li agree to such a gruesome task?

One possibility is that Li needed Rolf’s resurrection serum for his father. One side effect of Rolf’s miracle drug is often amnesia. Perhaps Wei was given the drug but doesn’t remember who he is. Saving his father would certainly be a good reason that Li agreed to watch over Stefan’s heartless corpse. Tragically, Stefan’s own twin brother Jake DiMera (also Brandon Barash) was recently shot and killed in a mugging! Rolf was unable to save Jake but as he told Kristen DiMera (Stacey Haiduk) he would likely have more success bringing Stefan back. Kristen told Rolf to give Stefan his brother’s heart!

Li has recently begun dating Gabi Hernandez (Camilla Banus). Although Gabi was happy with Li, Stefan was the love of her life. Li told Rolf to stall the process as long as possible while Kristen insisted bringing Stefan back is Rolf’s priority. Rolf will know he can’t stall Stefan’s return for fever long so he will have to work fast to get a commitment from Gabi and so will
What do you think?

Is Jake gone forever? Will Stefan wake up soon>? And what is the connection between Rolf and Stefan? Anything can happen in Salem so stay tuned to Days of Our Lives airing weekdays on NBC. And don’t forget to check back right here regularly for all your Days of Our Lives news, information and spoilers!