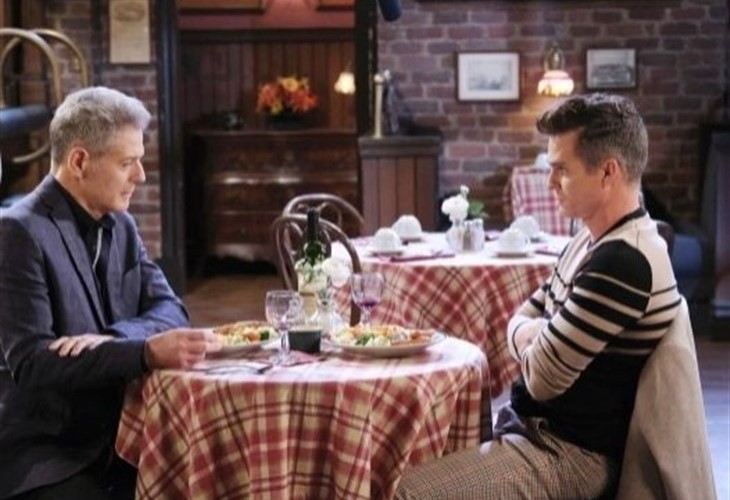 Days of Our Lives (DOOL) spoilers for Monday, March 21, 2022, reveal Sonny and Will thinking they came up with the perfect way to expose Leo.

Sonny Kiriakis (Zach Tinker) and Will Horton (Chandler Massey) thought that had gotten through to Craig Wesley (Kevin Spirtas) about how Leo Stark (Greg Rikaart) is doing nothing but conning him because that is just what he does. It’s part of his shtick and part of his nature, but Craig doesn’t want to believe it because he is in love with the man.

So, Sonny and Will come up with the idea of Craig catching Leo cheating on him — with Chad DiMera (Billy Flynn). Yes, they want Belinda China Shoppe to help them with this one and slip into bed with Leo just so Craig catches them together and knows he’s been snowed. Something tells us this little plan is going to backfire big time.

Meanwhile, Craig and Leo have a long discussion about the idea to take Kayla Brady’s (Mary Beth Evans) job. It’s what Leo wants, but will Craig go for it? After all, it will take him back to his scheming days when all he wanted to do was get ahead at the hospital. But will it remind him of Nancy Wesley (Patrika Darbo) because Nancy was always his partner in crime and they always seemed so much in love?

DOOL Spoilers – The Devil Within Salem

Salem’s second exorcism in a year is still going on in the DiMera mansion as all sorts of other strange things go on as well. Now, Marlena Evans (Deidre Hall) has brought in the big guns and John Black (Drake Hogestyn) is there to make sure this happens right. Too bad they are now going after the wrong person. It’s not Belle Brady (Martha Madison) who they need to be focusing on. It’s Johnny DiMera (Carson Boatman) who should be tied to that bed right now, but the devil is much more clever than they think.

However, Shawn Brady (Brandon Beemer) thinks something is off with this whole scenario and questions JoDevil about it. Now, JoDevil is not about to let anyone get in his way, so is Shawn about to be thrown across a room again. He managed to survive such brute force last time, but will it happen this time? Stay tuned to Days of Our Lives weekdays to see how these stories play out.