Days of Our Lives Beyond Salem Spoilers: Will Hope Hold Out For Her Hero? 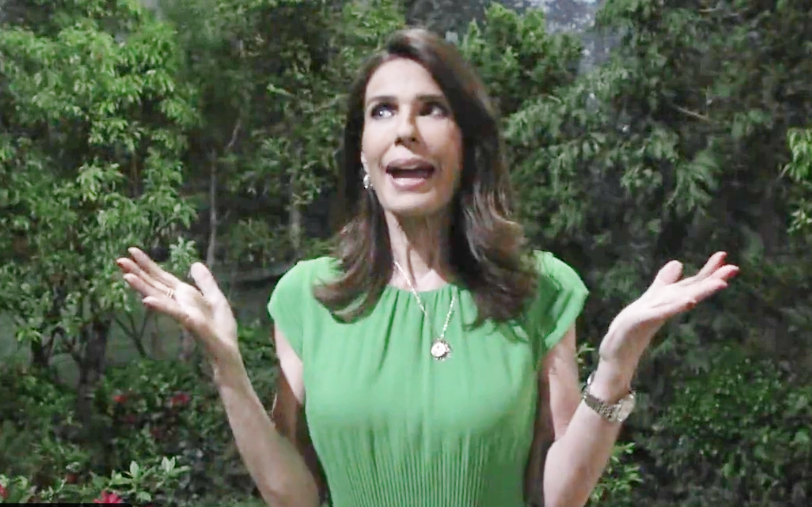 Days of Our Lives: Beyond Salem spoilers for Friday, July 15, 2022, reveal the prisms possibly doing their magic nearly 40 years later.

Days of Our Lives: Beyond Salem Spoilers: Could Hope Really Be Dead?

It looks like we are back on Wednesday at Hope Brady’s (Kristian Alfonso) ill-fated wedding to Harris Michaels (Steve Burton), but this time Hope is alive — thanks to Sister Mary Moira (Eileen Davidson) and holy shit! (Hope said that), Megan Hathaway (Miranda Wilson) is also alive. Hope hasn’t seen Megan since 1984 when she was allegedly electrocuted in a hot tub the same way Andrew Donovan (Colton Little) and Paul Narita (Christoper Sean) almost were earlier this week. And they were at The Body Connection of all places, with Chris Koitcheck (Josh Taylor) as the owner.

Now, what will Megan do with that prism Hope had hiding in that cleavage and does it have anything to do with brain tumors still?

At the DiMera party, Salem lives collide as the prism is right there for the taking and a brainwashed Steve Johnson (Stephen Nichols) and John Black (Drake Hogestyn) are ready to take it, but Kayla Brady Johnson (Mary Beth Evans) and Marlena Evans (Deidre Hall) always know when something is up with their men and they realize they are not acting like themselves, so they must save the day.

As this is the end of Beyond Salem, we know they do save the day and will have to say goodbye to the younger generation of Johnson, Blacks, and Donovans. But at least Paul and Andrew Donovan seem to have found one another.

Those prisms might really come in handy down on Earth as Bo Brady (Peter Reckell), who died of a brain tumor in Hope’s arms back in 2015 in a writing error that has never been fixed. Up in heaven, Angela (Loretta Devine) has some second thoughts and gives some good news to Bo, as Hope has been holding out for her hero for way too long. Will whatever we imagine happen as Hope and Hope truly celebrate their love for one another? We can only dream of better DAYS ahead. Tune in to all 5 episodes Days of Our Lives: Beyond Salem, Chapter 2 on Peacock, streaming for quite a while.

GH Spoilers: Selina and Valentin In Cahoots? Here are the Clues