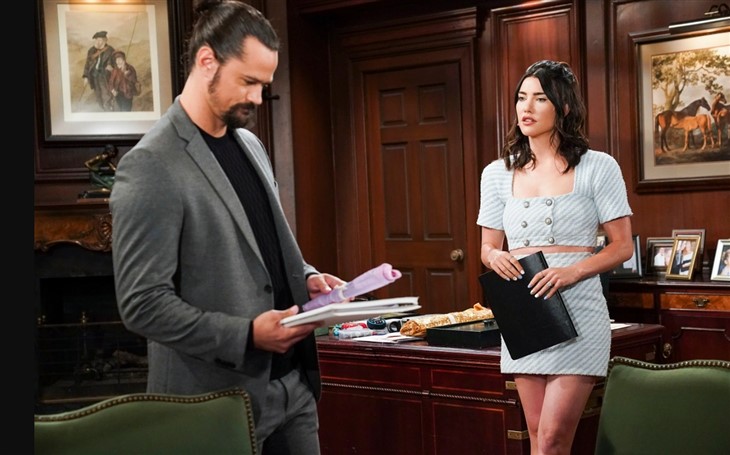 The Bold and the Beautiful (B&B) spoilers for Thursday, December 1, 2022, reveal a day of fireworks between the Forrester siblings.

All Thomas Forrester (Matthew Atkinson) wanted to do was see his parents back together again — and stick it to Brooke Logan (Katherine Kelly Lang) at the same time since he was sick of her criticizing his parenting skills and thinking he would do something to physically hurt Douglas Forrester (Henry Joseph Samiri). But what he did was sneaky and underhanded and ended up emotionally hurting Douglas instead.

Thomas was fine with Ridge Forrester (Thorsten Kaye) and Taylor Hayes (Krista Allen) getting married again with his own dirty tricks as the original impetus and he knew that Steffy Forrester (Jacqueline MacInnes Wood)Finnegan wanted the same thing. He just can’t understand for the life of him why Steffy would tell the truth about what he did.

Steffy is just tired of the lies and has grown as a human being more than Thomas has. For some reason, Thomas doesn’t seem to understand that because everything he did was just a means to an end. Too bad the end came with a wedding that was interrupted.

Apparently, Dollar Bill Spencer (Don Diamont) handing Deacon Sharpe (Sean Kanan) some Monopoly money with his face on it while declaring that he is Dollar Bill Spencer hasn’t deterred Deacon from wanting Brooke. And neither has an affair with crazy Sheila Carter (Kimberlin Brown). He might be living with her, but she is supposed to be dead so he can pretend none of it is real.

When Deacon learns that Brooke has rejected Bill the same way he rejected her, he finds time to antagonize Bill for being in the same position Deacon is in. However, it looks like neither one of them plan to give up. They have wanted Brooke for years but could never seem to win her from Ridge no matter how hard they tried.

But what about Brooke? How will she feel when she learns what happened in the Forrester living room? Deacon and Bill might both be left out in the cold… Stay tuned to The Bold and the Beautiful weekdays to see how these stories play out.