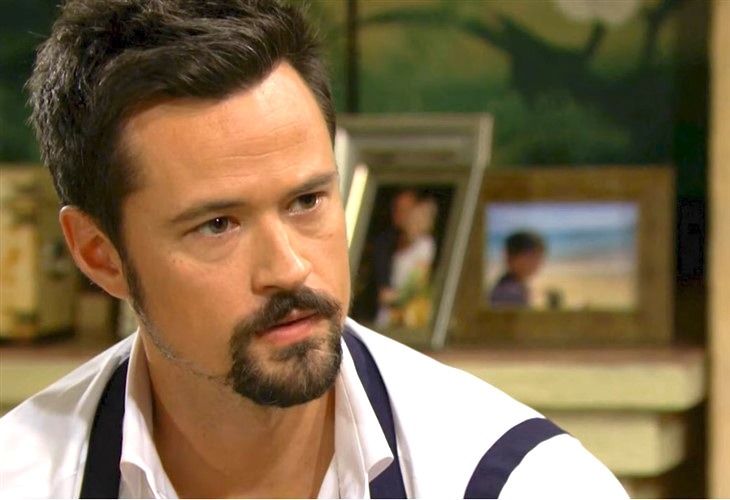 The Bold And The Beautiful (B&B) spoilers suggest that Thomas Forrester (Matthew Atkinson) has finally been handed the one thing that will separate Ridge Forrester (Thorsten Kaye) from Brooke Logan (Katherine Kelly Lang). Ridge unknowingly gave Thomas all the ammunition he needs to break up his marriage.

The Bold And The Beautiful Spoilers – Ridge Forrester Talks Too Much

The Bold and The Beautiful spoilers reveal that Ridge may have said way too much when he told Thomas about Brooke’s threats to call CPS. However, it seems that Thomas has used this to his advantage and Ridge is none the wiser. Thomas sent Ridge to Eric Forrester’s (John McCook) home for a reason. Thomas had something up his sleeve that his father would never even consider.

Weeks ago it was revealed that Douglas Forrester (Django Ferri) revealed that he has a voice changer that he made sound like Donna Logan’s (Jennifer Gareis) voice. Of course, Thomas may have thought about using this before he talked to Ridge. However, Ridge’s words lead Thomas to know exactly what to do for revenge.

There was some reason that Thomas kept goading Brooke at Eric’s house while threatening her. Meanwhile, Thomas could have been using the device to get a copy of Brooke’s voice for later use. Thomas had no idea he would get to use it so soon though. When Ridge mentioned CPS, Thomas knew exactly what to do.

Thomas sent Ridge home vowing to finish up at the office right after he said he was going home. Before Thomas could get home, CPS shows up right before he comes past them and asks what is going on. Ridge, of course, wasn’t a bit suspicious of Thomas’ actions but to any viewer who knows soaps, it was very clear that Thomas had called them himself. However, fans also know that Thomas set up Brooke as well.

The Bold And The Beautiful – Ridge Forrester Acquires A Recording

It seems that Brooke will deny calling CPS which will lead to Ridge acquiring a recording of Brooke’s voice on the phone making the report. However, Brooke was with Hope and Liam most of the time. Brooke knows she didn’t call and would not deny it if she knew they recorded the call. However, Brooke’s denials will make her look all the more guilty. Will the truth about the call come out before Ridge breaks things off?

Thomas wants Brooke out of their lives. Thomas has already vowed to do whatever it takes to get rid of Brooke. Ridge will not believe Brooke when he hears her voice on that recording. However, Douglas tends to rat people out. Will Douglas tell on his father once again when he realizes he used his machine? Perhaps Douglas will even play the recording for Ridge so he sees it was a fake voice on the phone.

Can Thomas be stopped before Brooke and Ridge are done for good? Will Taylor Hayes (Krista Allen) stand by and allow her son to do something so underhanded to his father’s marriage?