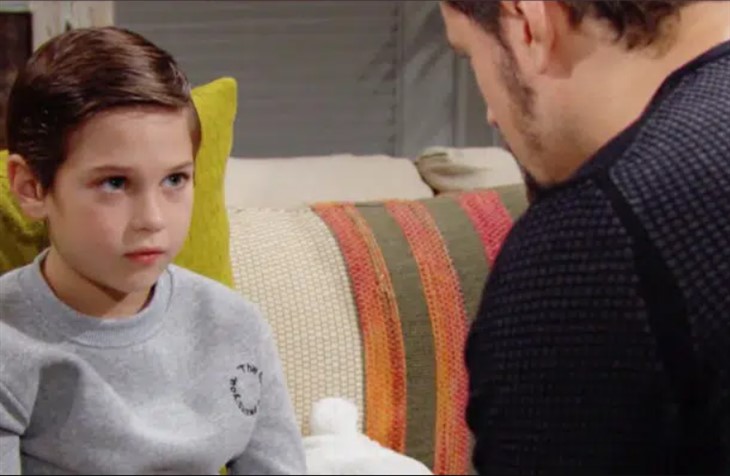 The Bold And The Beautiful Spoilers – Thomas Forrester’s Guilt

B&B spoilers reveal that Sheila triggered another one of Steffy Forrester Finnegan’s (Jacqueline MacInnes Wood) memories. Steffy not only remembered the shooting but why she sought out Sheila in the first place. After confronting Sheila, the villain admitted to shooting Steffy and killing John “Finn” Finnegan (formerly Tanner Novlan).

Then, Sheila confessed to being the reason why Brooke relapsed on New Year’s Eve. Sheila also told Steffy, Ridge, and Taylor Hayes (Krista Allen) that Thomas knew about it. Meanwhile, Thomas’ guilt about keeping Sheila’s secret will continue to weigh on him.

Ridge went to tell Brooke that her drinking on New Year’s Eve wasn’t her fault. However, Ridge hasn’t informed Brooke that Thomas knew and didn’t say anything. It is teased that Ridge and Taylor will keep a secret. So, they will probably keep Thomas’ involvement quiet.

The Bold and the Beautiful spoilers reveal that Deputy Chief Bradley Baker (Dan Martin) grants Brooke a visit with Sheila in jail. Brooke will probably gloat about Sheila not getting away with her crimes. Brooke might also inform Sheila that she’s never getting out of prison. That might be when Brooke finds out about Thomas’ involvement.

Of course, Brooke will share this insight with Hope. As fans have seen, Hope has been torn apart over how the relapse affected Brooke. So, finding out that Thomas knew and said nothing will infuriate Hope. In fact, it might make Hope question if Thomas really is as changed as he claims.

With Brooke’s prodding, Hope might decide that Thomas isn’t a good influence on Douglas Forrester (Henry Joseph Samiri). This could prompt Hope to restrict the amount of time Thomas and Douglas spend together. This would create a new Forrester/Logan war as well as a custody battle.

What do you think will happen when Brooke and Hope find out about Thomas’ involvement with Sheila? Could Hope try to get justice for Brooke by punishing Thomas? Could Douglas get roped into this storyline? Is this the custody battle that fans have been waiting for so Thomas can finally get back his son? Share your thoughts and remember to keep watching the CBS soap to see what happens next.