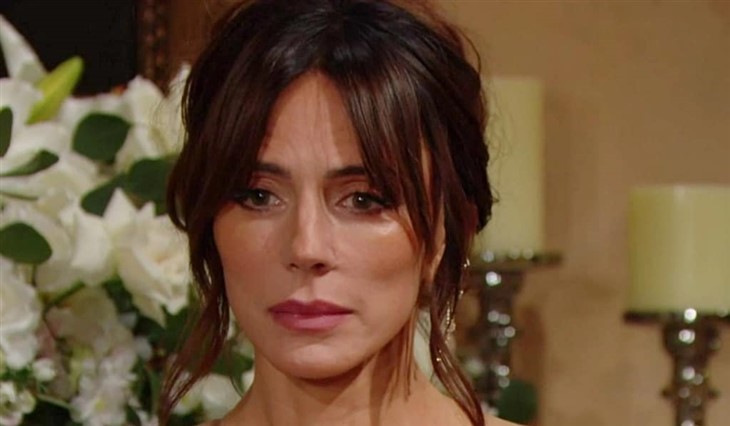 The Bold and the Beautiful (B&B) spoilers document that Taylor Hayes (Krista Allen) is willing herself to be hopeful. But her daughter’s, Steffy Forrester Finnegan (Jacqueline MacInnes Wood), pointed question to Ridge Forrester (Thorsten Kaye) hit at the heart of soapy matter.

Steffy asked her father if what he learned about Brooke Logan (Katherine Kelly Lang) caused him to want to marry her mother, Taylor. Ridge denied that was the case, insisting that he loves Taylor and wants her to be his everything moving forward on B&B.

The Bold And The Beautiful Spoilers – Yes, Taylor Hayes Is Second Choice

If Taylor was Ridge’s first choice, he could have left Brooke at any point since the recast to Allen took place. Devoted viewers know that Taylor has been off-screen for a while, with the recast from Hunter Tylo (the original Taylor) to Allen taking place last year.

Brooke gave Ridge ample reason to leave her when her New Year’s Eve connection with Deacon Sharpe (Sean Kanan) was exposed. But Ridge could not pull himself from his Logan because she is his greatest love.

It feels as though Taylor has rationalized this remarriage, choosing to believe that Brooke will fade into the either, over time.

Taylor represents stability for Ridge. He sees her as the opposite of Brooke.

The comparison between both ladies, while often unspoken, reaffirms Ridge is drawn to two different personality types. However, he has not demonstrated that Taylor is the woman he now loves.

Flying to Aspen, Colorado, to tell Taylor she was the woman he wanted to spend the rest of his life with, was a sincere effort. But Ridge intentionally omitted what caused him to run away from Los Angeles, California.

If Ridge did not learn Brooke reported Thomas Forrester (Matthew Atkinson) to the authorities, which viewers, Thomas, and his son know is not true, Kaye’s character would not have chased Taylor when she began running from him in B&B’s most recent location setting.

The Bold And The Beautiful Spoilers – Thomas Forrester’s Balloon Pops

Brooke knows that Thomas is somehow responsible for Ridge suddenly wanting to end their marriage. But she is powerless to reverse momentum because Thomas has managed to keep her from knowing the truth.

This reveal seems inevitable. But soaps are about stretching drama, even on B&B, where a storyline can be pushed due to the time this half-hour steamer has to tell its stories.

So, it is hard to know when Brooke will be able to pop Thomas’ bubble and bring him down. Until then, she will look like the villain when her diabolical ex-stepson is the reason for her misery and Ridge’s confusion.