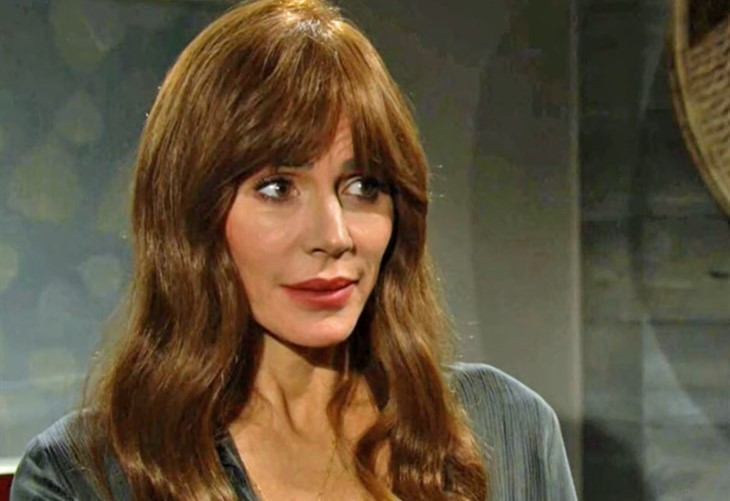 The Bold and the Beautiful (B&B) spoilers for Thursday, January 13, 2022, a Taylor dropping a few truth bombs on Steffy.

The Bold And The Beautiful Spoilers – Some Big Confessions

When Hope Logan Spencer (Annika Noelle) leaves in a huff after telling Steffy Forrester (Jacqueline MacInnes Wood) and Taylor Hayes (Krista Allen) to leave Brooke (Katherine Kelly Lang) and Ridge’s (Thorsten Kaye) marriage alone, Steffy is furious and Taylor has a few things to tell her daughter. Yes, she does want to have Ridge back in her life, and to be a family again, but she also may be having some trouble with Sheila Carter (Kimberlin Brown).

Steffy knew it wasn’t a good idea for Taylor to extend an olive branch to Sheila and invite her for Christmas, but now Sheila is becoming obsessive and wants to be Taylor’s best friend and Taylor is becoming wary of this and worries what Sheila might do to Brooke. Does Steffy tell her mother that she told her so or does she leave this one alone and just warn her mother to stay away, while also encouraging her to go after the man she wants?

Hope understands that her mother just fell off the wagon and felt the need to drink on New Year’s Eve and she blames Steffy and Taylor for making that happen to Brooke, but she does not understand why Brooke suddenly wanted Deacon Sharpe (Sean Kanan) out of their lives again.

She also doesn’t understand why she can’t reach her father after they were finally growing so close to one another. He seems to have disappeared and Hope wonders if Brooke knows why. Of course, Brooke lies because she is good at that and refuses to tell Hope about that kiss — and that she and Deacon slept (but only slept) in the same bed. After all, if anyone finds out, especially Ridge, then her marriage is over.

That doesn’t mean Hope won’t give up trying though. She finally had Deacon in her life again and she is not about to give that up. She is going to find him and learn what’s really going on here. Stay tuned to The Bold and the Beautiful weekdays to see how this story plays out.

Days Of Our Lives Spoilers: A Clue In The Search For Sarah