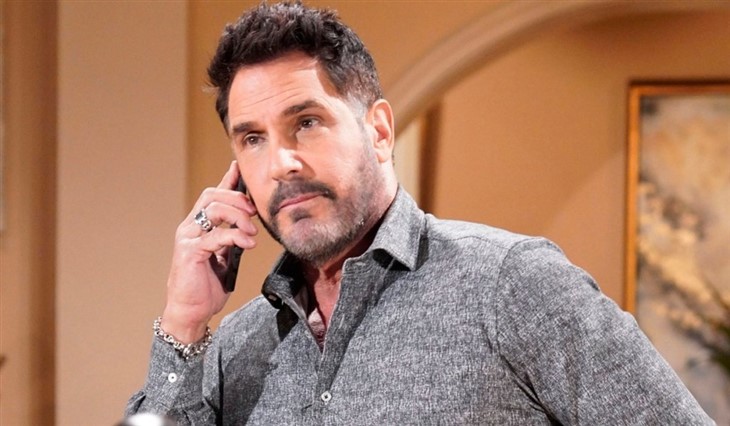 The Bold and the Beautiful spoilers document that Bill Spencer (Don Diamont) finds himself in the most remarkable scenario. He never considered that dinner with Wyatt Spencer (Darin Brooks) would link him to discovering that John Finn Finnegan (Tanner Novlan) is alive.

Soaps have many implausible yet wonderful outcomes. Devoted fans understand that this form of entertainment is an escape from the real world. They appreciate the efforts those in front of and behind the scenes make to create compelling drama.

The Bold And The Beautiful Spoilers – What About Katie Logan?

Analysis of Bill’s potential love life must begin with a Katie Logan (Heather Tom) update. Sadly, for Bill, there is no new news to report.

The status quo has Katie unwilling to recommit to her greatest love. The man who is Will Spencer’s (Finnegan George) father truly cares about Katie. But his pattern of behavior has so often caused her emotional strife that was avoidable.

So, it will be interesting to see how Katie responds if Bill and Li are in the process of eventually developing what becomes a romantic relationship. Might this seemingly new path be part of a triangle story line?

Sheila Carter (Kimberlin Brown) is fully despicable. Sheila’s forced tell to Finn, regarding what happened to his mother, conveniently left out her being unwilling to attempt to rescue Li.

Fans recall that Li’s sports utility vehicle ran off a bridge and into the water and apparently was near the restaurant where Wyatt took his dad. Sheila was tailgating Li as that happened because she wanted to avoid being captured by the authorities.

Seeing the fugitive, Sheila, peering down her nose at Li’s assumed watery grave was grotesque because Brown’s character was smiling. Digitally skip to when Bill saw Li on the docks, not knowing who she was, rescued her and took Li to his home.

Bill finding Li sets the stage for the plot to be pushed. Bill is teased to learn the identity of the woman he brought into his house.

Li’s amazing story will include enough information that allows Bill to determine Finn is alive. That will lead to Novlan’s character being found.

Whether Sheila will still be with Finn when that rescue happens is yet to be determined. Fans are anticipating that resolution and are also wondering if Li will become the next lady in Bill’s life. If so, Katie is sure to react to that unlikely news.